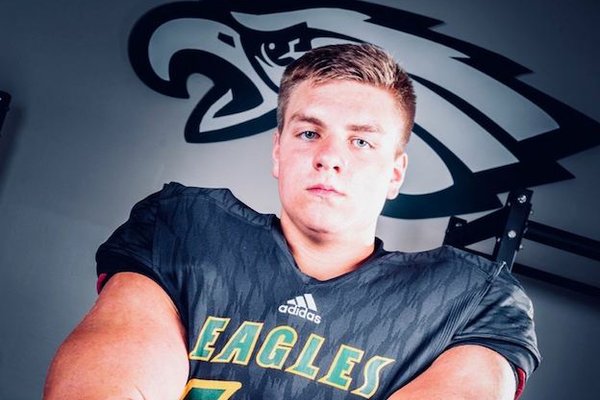 Texas offensive lineman Remington Strickland announced his top eight schools on July 25 and Arkansas was included because of the reputations of coach Sam Pittman and offensive line coach Brad Davis.

“Arkansas made the cut because of the great offensive line coaches with coach Pittman and coach Davis,” Strickland said. “Both guys are O-line gurus and always get their lineman to the NFL, so that was huge for me.”

Davis has let Strickland know he should be in Fayetteville.

“I talk with coach Davis on a pretty regular basis,” Strickland said. “We have a solid relationship he makes it clear that he would love to coach me at Arkansas.”

Christian Academy coach Jordan Black played at Notre Dame in 1998- 2002 before enjoying a 10-year career in the NFL while playing for the Kansas City Chiefs, Houston Texans, Jacksonville Jaguars and Washington football team.

Strickland also stands out in the weight room and has maxes of 405 pounds in the bench press, 550 in the squat and a deadlift of 500. ESPN rates him a 3-star recruit and the No. 10 center in the nation for the 2021 class.

Covid-19 has complicated the recruiting process for Strickland.

“The virus has made me take my time in my decision process since I’m not able to visit many of the campuses I’ve been offered by,” Strickland said. “I wanted to commit before my senior season but that won’t happen now.”