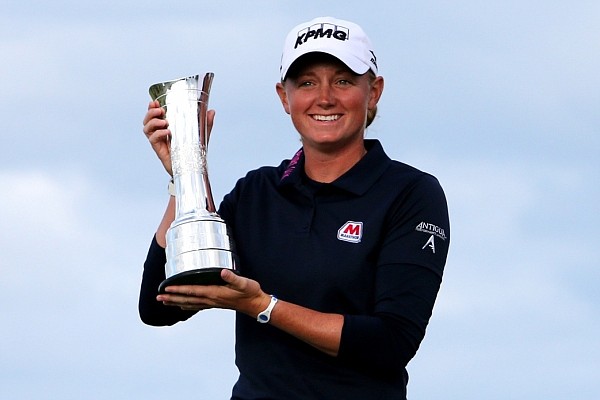 Photo by The Associated Press

FAYETTEVILLE -- The extreme windy conditions made it tough to go on the offensive during the final round of the 2013 Women's British Open at the Old Course at St. Andrews in Scotland.

But Stacy Lewis was trailing Na Yeon Choi with holes running out.

On the famous "Road Hole," the par-4 17th, Lewis made a swing that changed the dynamic of the unforgettable finish.

The former University of Arkansas All-American and NCAA medalist in 2007, Lewis selected a 5 iron and made magic happen. Her shot navigated the slopes just right and rolled up to 3 feet short of the hole, where she sank the birdie putt for a tie.

"That might be one of the best of my career," Lewis said that day of the stroke. "I was trying to hit it 160 yards in the air. It worked out perfectly."

While she was walking off the green and headed to the No. 18 tee, she told longtime caddie Travis Wilson, "One more," according to a USA Today story on the event.

Lewis, the 2012 LPGA Player of the Year, got that one more by draining a 25-foot putt on No. 18 to take the lead at the birthplace of golf.

"To birdie 17 and 18 at the home of golf in a major championship, it just doesn't get any better than that," Lewis said in an interview with sponsor KPMG.

Choi, who led by three shots with six holes to play, was just trying to hold on through the blustery conditions. She three-putted No. 14 for her third bogey in a row, then added another at No. 17 to secure Lewis' second major title.

"It's unbelievable," Lewis told reporters. "It all happened so fast at the end. You're afraid for every shot, and all of a sudden you make a couple of birdies and it's over."

Lewis' triumph snapped a streak of 10 consecutive majors won by Asian players. Lewis' victory in the 2011 Kraft Nabisco had been the last victory in a major by an American.

The former Razorbacks' incredible finish at St. Andrews happened seven years ago today, and Arkansas Coach Shauna Taylor had a front-row seat for it all.

"It's one of the greatest golf experiences of my life," Taylor said. "As a spectator, watching her win a major at St. Andrews was incredible."

It was only the second time the Women's British Open had been played at St. Andrews.

"She just played a spectacular round of golf on the final day," Taylor said. "Just to be there, I mean, if you're ever going to win a British Open, at the home of golf would definitely be on your list of places to do it.

"I always say one of the greatest golf shots I've ever seen was her 5 iron into 17 on the 71st hole. It was unbelievable."

Said Lewis in the KPMG interview: "No. 17 is probably one of the hardest holes there is in major championship golf. You start out with a tee shot that, it's blind, you're hitting over the corner of the hotel just to hit the fairway. So I hit a really good drive just to be in the fairway.

"Then the second, I don't even know the exact yardage, but I think I was about 200 yards from the pin. Right off the face, I knew it was good, but you never know what kind of bounces you're going to get at a British Open. In the air, I was just hoping I got a good bounce. It couldn't have been more perfect.

"It's one of those shots that I'll remember for the rest of my life, and I think a lot of other people will, too."

Lewis had rented out a bed and breakfast for her family and Taylor, and the group had a blast watching Lewis perform.

"We spent the entire week together preparing," Taylor said. "I went through the practice rounds with her. Honestly, it was just probably one of the most magical weeks I've ever experienced in golf."

Lewis' victory at St. Andrews was not her first major success there.

She led Team USA to a runaway victory in the Curtis Cup over Great Britain and Ireland on the same course in 2008. Lewis went 5-0 in her matches at that competition, her last as an amateur. She was the first player to ever go 5-0 in one Curtis Cup.

Lewis, a first-time mother after she and her husband Gerrod Chadwell had their daughter Chesnee Lynn Chadwell on Oct. 25, 2018, spent part of the 2019 season as a volunteer coach for the Razorbacks for her good friend Taylor.

"We've gone to breakfast with her and stuff," Arkansas junior Brooke Matthews said. "She's been a really big part of our program, and she's done a lot for it. Not only on the recruiting side, but she's always good to us when we get to see her."

"It's good for me to see her relationship with coach," Mistry said. "We can see how close they are and how well they work together, like the communication between them. It's another thing that I've learned from."

Lewis won four tournaments in 2012 and became the first American to win LPGA Player of the Year since Beth Daniel in 1994. She won three tournaments in 2013 and three more in 2014 while pulling down her second player of the year title. She had two stints as the No. 1 ranked player in the world between 2012-14.

A 12-time winner on tour, Lewis has 17 top-10 finishes in the five women's majors, including the two victories, a trio of second-place finishes and two third-place showings.

Lewis, now 35, was born in Toledo, Ohio, and returned there last week for the LPGA Drive On Championship. She finished at 9-over par in a tie for 67th. Lewis is entered in this week's Marathon Classic in Sylvania, Ohio.