State of the Hogs: Winning culture begins with player accountability 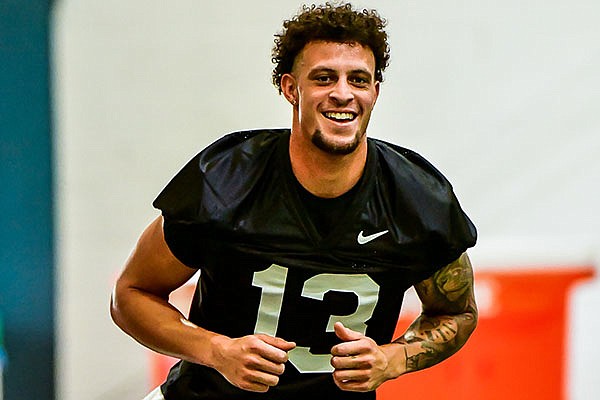 Arkansas quarterback Feleipe Franks is shown during a July 2020 workout in Fayetteville.

When I think about the issues that caused failure in the Arkansas football program over the past several seasons, I start with a lack of leadership. I’m talking about the head coach and the staff that was hired as a starting point, but players have to lead, too.

There just wasn’t enough of that with Razorback football in the last days of the Bret Bielema era and for either of the Chad Morris seasons. I pointed to leadership as the most important aspect of the search that produced Sam Pittman.

Pittman appears to have leadership qualities, as do many of his assistants, if not the entire staff. I even like the character in the quality control hires. Men like Joseph Henry and Michael Scherer exude character. Graduate assistant Ryan Yurachek, son of Hunter Yurachek, is out of the same mold.

It’s that kind of character and leadership that made the arrival of quarterback Feleipe Franks critical. His ability to point a team in the right direction has been obvious over the last five months when coaches have been talking to their players via computer screens and smart phones more than with an arm around their neck.

Franks, the Florida starter until a severe ankle injury decked him early last season, had no such restrictions. He could coach the players in the weight room like an experienced winner that he was at Florida. His words – and always the right words – carried weight.

The transfer quarterback is worth a lot in his leadership skills, but he also has the kind of ability that makes everyone want to listen. He has a gun for an arm and a towering body. At 6-6 and 238 pounds, he’s an imposing figure.

These thoughts came to mind as I read news from the Chicago White Sox about another leader that came out of a winning culture. Dallas Keuchel, a free agent pickup this winter, called a players-only meeting this week to heighten the focus as the White Sox try to make a push in the shortened baseball season. Teammate James McCann, who like Keuchel is a former Razorback, backed his battery mate.

The message delivered probably was learned at Arkansas as he toiled under Dave Van Horn and Dave Jorn. Those two men helped establish a culture of work and focus that has been the cornerstone of regular trips to the College World Series.

I read Keuchel’s statement carried by the Chicago Tribune in Thursday’s online edition. It was made to the entire pool of reporters covering the White Sox and mirrored what Keuchel said behind closed doors to his teammates.

Keuchel made his remarks Monday night after the White Sox lost a 5-1 decision to Detroit.

“We have enough talent to win potentially every game. It’s very frustrating when you have games like this. It just seemed like we were out of it from the get-go.

“It just seemed like we were taking a night off. And we can’t afford that with a young core that we have here.

“We have to show up every day, and even if there are no fans, we have to make sure that we are ready to go. And if we’re not ready to go, we have to fake it until we make it. (Monday) was one of the first games that I’ve seen very subpar play from everybody.”

The next day, McCann provided insight into how Keuchel’s message was perceived.

“The way he went about it, no one was singled out, it was a team-type comment,” McCann said. “It was really the first full-team kind of gut check. It couldn’t have come from a better guy or at a better time.”

Keuchel and McCann were signed by the White Sox in the last two seasons to deliver just those type clubhouse messages to a young team that is talented, but lacks experience. They are top-shelf character guys.

I felt like I was listening to a Van Horn speech about culture. Accountability in the locker room is huge with Van Horn. The veterans teach the newcomers how to work and the Arkansas way as far as the way you act on and off the field. It’s a beautiful thing to watch, but never easy to establish.

Keuchel and McCann are off to solid starts. Keuchel, former Cy Young Award winner with the Houston Astros, is 2-2 with a team best 3.02 ERA. McCann is hitting .375, second on the team, while backing up Yasmani Grandal (.245).

McCann is in his second year with the White Sox. He surprised by making the All-Star team last season, then delivered the key plays in the American League’s victory.

By all accounts, Franks is the same type leader is Keuchel and McCann. If he can deliver Keuchel-like talks to his young Razorback teammates, it might go a long way in helping Pittman steady the ship in his first season.

Yes, talent is important. The fact that men like Keuchel and McCann are elite talents is important. When your best players are also your best leaders, a winner is the result. That’s what the Hogs are hoping for with Franks.