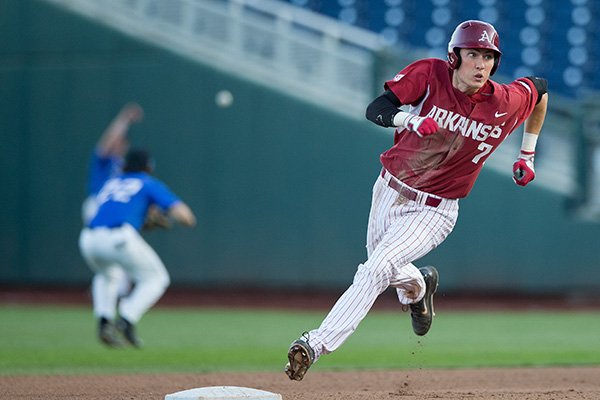 Arkansas' Bobby Wernes rounds the bases after hitting a triple in the sixth inning of a game against Creighton on Tuesday, May 12, 2015, at TD Ameritrade Park in Omaha, Neb. (Mark Davis/Omaha World-Herald)

Wernes, 26, has spent the past two years coaching a minor-league rookie team for the Philadelphia Phillies in Florida. He replaces Taylor Smart, who was Arkansas' volunteer coach the past two seasons.

Wernes was a two-year starting third baseman for the Razorbacks in 2014 and 2015. He was named to the SEC's all-defensive team as a junior when Arkansas played in the College World Series.

“We are extremely excited to get Bobby back in our program,” Arkansas coach Dave Van Horn said in a statement. “He was a tremendous player, leader and teammate when he was here."

Wernes was promoted to manager of the Phillies West team in the Gulf Coast League for the 2020 season, but never managed a game because of the covid-19 pandemic that canceled the minor-league season.

"We all knew he was going to be a great coach one day and he did a tremendous job in the Phillies organization," Van Horn said, "so much so that they made him the manager and wanted him to lead a team after one year.

“We feel Bobby has a bright future in coaching and are very fortunate to get him back here to work with our catchers, assist me with the infielders and Coach (Nate) Thompson with our hitters. He knows our program, our culture, our work ethic and will be a great addition to our staff and I know our players will like having him coaching them.”

Arkansas' volunteer position has served as a successful launching spot for coaches in past years. Tennessee hired Josh Elander in 2017 and Abilene Christian hired Craig Parry in 2018 to full-time assistant positions after one season apiece volunteering for the Razorbacks.

Arkansas-Little Rock head coach Chris Curry was a volunteer at Arkansas in 2009 and 2010.

“Having the opportunity to be back at Arkansas is truly a dream come true for me and my family,” Wernes said in a statement. “I know how lucky I was to be able to play here and I feel even more fortunate to be back as a coach. I can’t thank Coach Van Horn enough for the opportunity, and getting to learn from him, Matt Hobbs and Nate Thompson will be an unbelievable experience.

“I loved every minute that I got to play for the Razorbacks and I know I will love every minute coaching for them.”