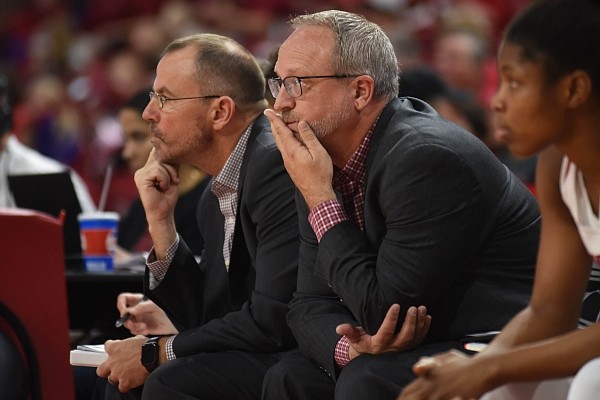 Sciolla, 6-0, of Pennsbury High School in Fairless Hills first communicated with Neighbors in the spring, and it’s heated up since she received a scholarship offer from the Razorbacks.

“I know Coach Neighbors is a great coach and I love the way Arkansas plays, so it’s obviously exciting to me to be offered by them,” Sciolla said. “Our communication started pretty recently. We connected at the beginning of the quarantine but nothing serious, and then about three or four weeks ago we talked and he offered me two weeks ago when we checked in.”

Neighbors is known as an excellent communicator and has the ability to connect with people in a short time. Sciolla has experienced that firsthand.

“He does a great job of being personal like that. I very much enjoy our conversations,” she said. “I think after a few conversations I seem to have gotten to know him partially already, so it’s exciting to continue that process.”

Sciolla is coached by her father, Frank, who led the Lady Falcons to a 24-5 record last season.

“I’ve been told by a lot of people I play like a coach’s kid, which I take as a compliment because I know how well my dad knows the game,” she said. “Everything I know I’ve taken from him. So I think that’s made me more of a cerebral player, which is to my advantage as I’ve advanced at the AAU level in recruiting.”

She doesn’t know her exact number of scholarship offers.

“I do not know the number off the top of my head,” she said. “My dad has talked to me a lot about not being the person that collects offers. Not really focusing on the numbers, but the schools that I connect with is what I focus on.”

She averaged 14.5 points, 9.1 rebounds and 2.8 assists while being named to the third team of the Pennsylvania Sportswriters’ Girls Basketball Class 6A All-State team.

She was impressed on a recent virtual tour with the Razorbacks.

“It was nice to be able see it and put an image to what I’ve been hearing,” she said.

Sciolla has a 4.2 grade-point average, and plans to double major in psychology and political science.

“I would like to go to law school after college and study constitutional law,” Sciolla said.

She said she wants to visit schools once the NCAA lifts the dead period that was put in place March 13 because of the coronavirus pandemic.

“I think it will come down to being actually on campus and getting the feel for the culture of a team, because it’s hard to quite understand that over the phone,” Sciolla said.

Sciolla, who averaged 11.8 points a game as a freshman, said Arkansas is on her list of schools to see.

“It’s a school I plan on visiting once every thing opens up,” she said.

Former Arkansas center Moses Kingsley moved to the United States from Nigeria while in high school to pursue an education and his dream of playing basketball professionally.

He credits the late Ron Crawford for helping his dreams come true. Kingsley played for the Arkansas Wings, the organization Crawford founded in 1980.

Kingsley is now playing for the RETAabet Bilbao Basket in the ACB league in Spain.

The exposure he received while playing for the Wings was vital in his recruitment. Kingsley said he was just one of many that Crawford helped through the years.

“Through him, I was able to develop and grow my game to a national level,” Kingsley said. “Without him, it wouldn’t have been possible and a lot of players can say the same.

“It wasn’t just basketball with him. He cared for us, wanted the best for us and helped guide us whenever we needed it. We lost a great man. My condolences to the Crawford family.”