Missouri improving its 'brand’ in 2020 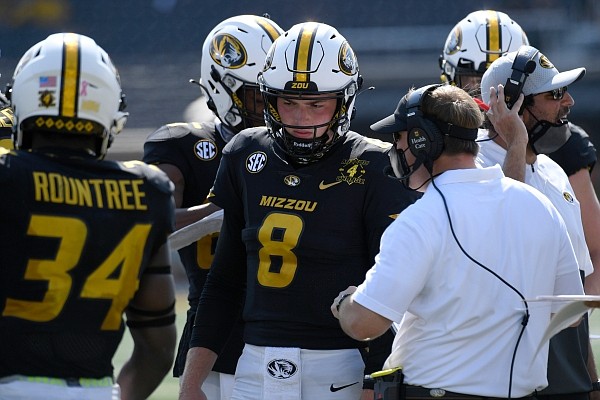 FAYETTEVILLE — Missouri football is on a low-key roll under first-year Coach Eli Drinkwitz heading into the final stretch of the season.

The Tigers (4-3) have won three of their last four games entering Saturday’s 11 a.m. Battle Line Rivalry game against the University of Arkansas (3-5).

Drinkwitz, a native of Alma and an Arkansas Tech graduate, was asked what he thought about the national attention Missouri has started to draw.

“I haven’t noticed that [and] don’t really care about it,” he said. “It doesn’t faze me, because it’s really never going to be about me. In this program, it’s always going to be all about our players and the Mizzou brand, and what we’re trying to accomplish for the Mizzou brand.

“I haven’t really seen anybody jumping up and down talking about us in the playoffs or anything, so I think we can temper expectations. Reality is for us we’ve got three games left. We’ve got a big game this week. It’s really going to be for us kind of a litmus test on where we’re at.”

Though Missouri has one home game remaining against Georgia at a date to be determined, the Tigers will celebrate senior day prior to Saturday’s game.

Asked whether the event for the seniors was due to the uncertainty of playing their final home game because of covid-19 concerns, Drinkwitz said, “Yup.”

The game will pit the Arkansas native Drinkwitz against an Arkansas staff that includes defensive coordinator Barry Odom, the Missouri alumnus and four-year head coach, and several staff members who were with him at Missouri, including offensive line coach Brad Davis and cornerbacks coach Sam Carter.

Last week was productive for the Tigers after the Razorbacks were forced to postpone their game due to low roster numbers. The SEC rescheduled a postponed game against Vanderbilt for Faurot Field, and Missouri routed the Commodores 41-0.

The domination showed up on both sides of the ball, as the offense and quarterback Connor Bazelak racked up 603 total yards, while standout linebacker Nick Bolton and the defense held Vanderbilt to 196 yards.

While the Tigers have not been beating the cream of the crop from the SEC East, they’re winning games with a suffocating defense and an offense that has shown increased effectiveness.

“Each week I think we’ve designed a plan that takes away what they do best and then forced them to try to beat us with their with their second pitch and that’s been really good,” Drinkwitz said of opposing offenses.

Bazelak has grown into an efficient quarterback as a redshirt freshman. The 6-3, 220-pounder has completed 147 of 209 passes for 1,622 yards, with 5 touchdowns and 2 interceptions. His 70.3% completions ranks fifth among SEC starters, just ahead of Arkansas’ Feleipe Franks (68%). His 141.5 passer efficiency rating is sixth in the conference.

Bazelak suffered a torn knee ligament in his first career start in last year’s season finale against Arkansas in Little Rock, but he rehabbed quickly over the offseason.

“You can look at Connor Bazelak, who had an unfortunate injury, had surgery,” Drinkwitz said. “He was here over Christmas break, through Christmas break, to have the surgery. He had to come back early during covid when nobody was around and train for a position he didn’t even know he’d have an opportunity to compete for.”

Opening-game quarterback starter Shawn Robinson was benched after a poor performance in Week 2 at Tennessee, then suffered an ankle injury against LSU the next week. The transfer from TCU has not been available the past two games, and Drinkwitz said he expected Robinson back next week.

Bazelak took the reins in Week 3 against LSU and hasn’t looked back. He completed 29 of 34 passes for 406 yards against LSU’s youthful secondary in the Missouri’s 45-41 upset at Faurot Field in Columbia, Mo., and was named the Davey O’Brien Award national quarterback of the week.

Last week, he carved up the Commodores for 318 yards on 30-of-37 passing to earn SEC freshman of the week honors.

“He did a nice job of reading coverages and putting the ball in some tight windows,” Drinkwitz said. “He’s continued to progress, getting better each week, taking what the defense gives him.”

Tailback Larry Rountree became the all-time Missouri rushing leader for a running back two weeks ago, and piled on 160 more yards and three touchdowns in the rout of Vanderbilt.

“They have exactly what they need,” Pittman said. “They have a great back in Rountree, a really good quarterback in Bazelak, and they’ve got a great slot. So on offense, big line, a guy you can hand it to, a guy you can throw it to and more.”

The Tigers actually have two potent slot receivers in juniors Jalen Knox and Fayetteville’s Barrett Banister. Knox, who has a team-high 26 catches for 261 yards, is questionable due to a lower leg injury that flared up last week. Banister, who had a game-high six catches for 60 yards in the Tigers’ 24-14 win over Arkansas last season, has 16 receptions for 146 yards.

Bolton is the prototypical modern linebacker, fast and physical at 6-0, 232 pounds, who makes plays between the tackles, on the edges and in the passing game. Bolton ranks third in the SEC with 10.9 tackles per game, squeezed in with three Razorbacks — linebackers Grant Morgan (13.0) and Bumper Pool (11.7), and safety Jalen Catalon (10.8) — as the only SEC players who are averaging double-digit tackles.

“Nick Bolton is probably as good of a linebacker as there is in the SEC, probably in the country,” Pittman said.

Missouri has played only three games when they were originally scheduled: the opener vs. Alabama on Sept. 26, a road game at Tennessee the following week, and a road game at South Carolina on Nov. 21. The Tigers have dealt with six adjustments to their schedule based on coronavirus issues.

The Arkansas game had been scheduled for Arrowhead Stadium in Kansas City, Mo., prior to the start of the pandemic.