Moody lives up to billing 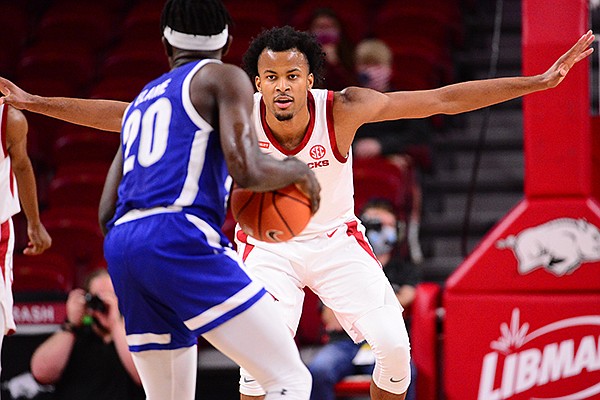 FAYETTEVILLE — Moses Moody showed Wednesday night why he was one of the top high school recruits in the nation last year.

The 6-6 freshman from Little Rock scored 24 points to lead the University of Arkansas to a 72-60 victory over Texas-Arlington in Walton Arena.

“I love the fact that he had 10 free throws attempted and nine rebounds. Love it. That’s awesome.”

Moody averaged 13.5 points the first two games this season on the strength of hitting 15 of 16 free throws. He was 5 of 21 from the field before heating up against UTA.

After being called for traveling, Moody scored seven of Arkansas’ first 15 points.

“I was just able to get started early,” Moody said. “The ball was coming to me, the game felt good, and I was letting the game come to me.”

Moody said he’s been trying to find his role on a team with nine newcomers, and he referenced some NBA players.

“I’m a role player,” Moody said. “So is LeBron James, so is Kevin Durant and so is [Matthew] Dellavedova. Everybody has a role on their team to help their team win, and I’ve been searching for mine.”

Arkansas guard Jalen Tate, a senior graduate transfer who had 14 points, 6 rebounds and 4 assists, said he loved how Moody didn’t let up after the Razorbacks built a 21-point lead early in the second half.

“A lot of guys take their foot off the gas, but not Moses,” Tate said. “He’s an exceptional talent. Especially at that age. He can really put the ball in the basket, and we’re going to need him to do that a lot of times this year.

“As a younger guy, he really knows how to listen, and he takes everything he can from us older guys. He’s just a great luxury to have.”

Sophomore center Connor Vanover scored 12 points for the Razorbacks while playing just 12 minutes. He hit 5 of 6 shots, including 2 of 3 three-pointers.

“I thought that they really went at Connor in middle pick-and-roll,” Musselman said of not playing him more minutes. “I thought Connor was incredible offensively, but we have to try to figure out what our pick-and-roll package is when people go at Connor.

“That’s going to be a big-time factor for our defense, for sure. We’re still trying to figure it out. How is Connor going to play that middle pick-and-roll?”

Senior graduate transfer forward Justin Smith added 11 points and nine rebounds for the Razorbacks (3-0), who improved to 9-0 all-time against UTA.

UTA guard Jordan Phillips, who began his college career at Arkansas and played seven games for the Razorbacks during the 2017-18 season before transferring, had three points. He hit a three-pointer in the first half on his only shot attempt.

Vanover started the run with a jump shot and Moody scored seven points, including a reverse layup with an assist from Desi Sills on a fast break.

UTA Coach Chris Ogden called a timeout after Moody’s basket made it 54-38, but the Mavericks turned the ball over on a shot-clock violation.

Arkansas then got a jump shot from Smith, a free throw from Sills and a jumper from Moody before the Mavericks got a basket from Wells to cut the Razorbacks’ lead to 59-40.

UTA didn’t pull closer than 12 points the rest of the game despite some sloppy play by the Razorbacks in the final minutes.

“It’s still early in the season,” Tate said. “We’ve got to learn how to execute a little better.”

Moody said he remained confident after some shooting struggles to start the season.

“You always assume you’re going to hit shots,” he said. “But when you don’t, you’ve got to trust the process. Too many people get too high after a big game or get too low after a bad game, but it’s just about trusting the process and trusting the work you put in and staying even keel.”

Musselman seemed as happy about Moody’s rebounding as his scoring.

“I think the rebounding thing is so underrated at that small forward or off-guard spot,” Musselman said. “When he can go get nine, it’s really vital to our team.

“Because, shoot, last year there were a lot of times we didn’t have anybody get nine. When you’re getting that from the guard spot, it changes who you are defensively.”

Moody said Musselman has stressed rebounding to him.

“It’s just a way that I can help the team, adding that to my role, being a guy who can crash the glass and get rebounds with my length and size,” Moody said. “I’m physically blessed to be able to do that, so utilizing it is what I’m able to do.”

Cunningham opened this season by scoring 21 points in the Cowboys’ 75-68 victory over UTA. So when it comes to points against a common opponent, Moody has bragging rights over Cunningham.

“We’ve been competing in practices for the last two years,” Moody said when asked about outscoring Cunningham against the Mavericks. “He was my roommate in high school, so we mess with each other all the time.

“I’m sure I’m going to have to text him after this game and let him know.”