Sills turns in clean floor game in win over Southern 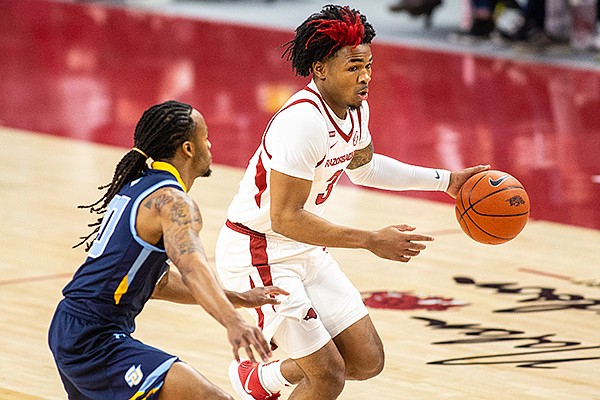 FAYETTEVILLE — When Desi Sills checked out of Wednesday’s game with 5:47 remaining, Arkansas coach Eric Musselman provided the guard a brief message and a pat on the backside.

The Jonesboro native turned in a solid all-around game in the Razorbacks’ 79-44 victory over Southern, finishing with 11 points and five assists — one shy of matching his career high — to go with a block and a steal.

From a shooting standpoint, Sills was able to fall into a bit of a rhythm against the Jaguars following a two-game stretch in which he was 3 of 10 from the floor.

And prior to Wednesday, he was 2 of 8 from 3-point range since the season-opening win over Mississippi Valley State.

“I mean, I'm a shooter and I'm going to keep on shooting it. Even thought I started off bad last year, that don't mean nothing to me. I'm going to keep working on my craft at the end of the day and it's showing early in this season that I'm a lot more confident in my shot.

“It's falling right now, so I'm going to keep on shooting it and helping my team out winning.”

Musselman also liked the fact Sills found his touch from the perimeter, knocking down three of the team’s 11 3-pointers. But he was most proud of the junior’s clean floor game.

It marked the second game in Sills’ career in which he finished with three or more assists and zero turnovers. And his five assists are the most he has recorded in a game since January of his freshman season.

Sills, who had a career-high five turnovers against North Texas, has nine assists against one turnover in the Razorbacks' last three games.

“I thought Desi was great. I really did,” Musselman said. “I love the fact that he had five assists and no turnovers. That’s been a big part of his evolution, to continue to be a combo guard and learn some of the point guard stuff.

“He’s obviously a 2-guard for us, but I think he’s done a great job of continuing to transition and have a little bit more of a role as a combo guy who can play the 1 and the 2.”

Sills’ five assists generated 12 points for the Razorbacks. He found Jalen Tate — who finished with 12 points — and Justin Smith for scores twice each, and Vance Jackson for a 3-pointer in the second half.

He knocked down a left-wing 3-pointer on Arkansas’ first offensive possession, then buried two after halftime from the right wing off of assists from Tate and Smith. Sills also took a charge in the win, wiping away a Southern layup with 13:01 to play.

"Desi is a great guy off the court, and on the court he's amazing,” said freshman guard Davonte Davis, who led all scorers with 14 points. “You love playing with him. He always communicates with you on the court. He's always going to make the extra pass, and that's what this team needs.

“Just being able to play with him is amazing."

Sills’ time on the floor may have ended with less than six minutes to play, but he remained locked in on the sideline, Musselman said, and acted as a true leader.

“Desi’s attitude was great,” Musselman said. “There was a minute left in the game and he was standing up behind the bench, coaching and trying to get guys in the right position. There was a lot of really, really good little things.”