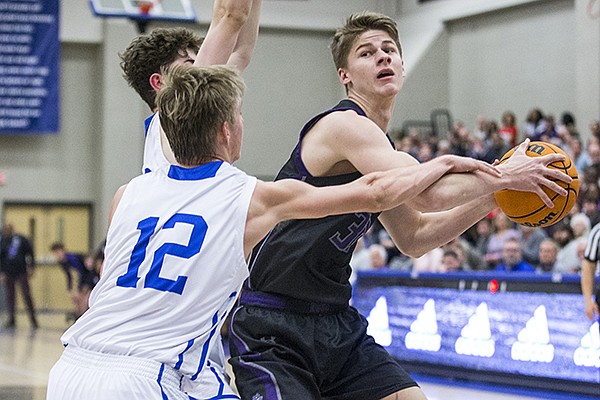 Fayetteville's Lawson Blake (32) is guarded by two Rogers defenders during a game Friday, Feb. 7, 2020, in Rogers.

Fayetteville native and forward Lawson Blake has committed to walk on at Arkansas.

Blake, 6-10, 230 pounds, of Link Year Prep in Branson, Mo., had previously received offers from Hendrix, the University of Dallas and North Arkansas College. Harding, OBU and others showed strong interest.

"Growing up in Fayetteville being a Hog has always been a dream of mine," Blake said. "Watching it become reality has been surreal. Having the opportunity to represent my hometown and state is a huge honor to me."

He also played for Fayetteville High School, where he averaged about four points and three rebounds last year to help the Bulldogs to a 21-9 record before reclassifying to the 2021 class and attending Link Year Prep.

He's averaging 13 points and 7 rebounds this season. He looks forward to learning from Coach Eric Musselman.

"The energy and culture that Coach Musselman has created has been awesome to watch," Blake said. "I look forward to operating under his playing style and getting to learn from him everyday."

Blake, who has scored a 32 on the ACT, played for AAO Flight on the Prep Hoops Circuit prior to his senior year and averaged about 6 points and 8 rebounds.