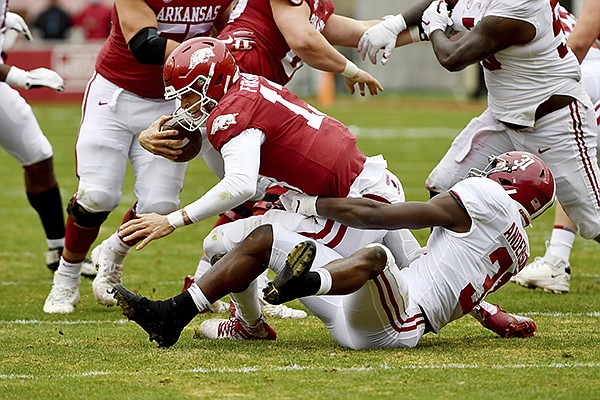 In two matchups with the Crimson Tide while Pittman was offensive line coach at Georgia, the Bulldogs surrendered six sacks that totaled losses of 46 yards. On Saturday, Arkansas surrendered eight sacks for minus-49 yards in its 52-3 loss to top-ranked Alabama.

“I thought we stayed in third-and-manageable pretty good in the first half, but we couldn’t convert. We have to move the pocket. Nobody can just sit back there against Alabama. We thought we could hit a little quicker throws and evidently they weren’t open.”

Coverage from Arkansas' 52-3 loss to Alabama

Pittman, who finished his first regular season as the Razorbacks' coach with a record of 3-7, did not make excuses for the near-constant pressure on quarterbacks Feleipe Franks and KJ Jefferson, but he did note that offensive lineman Ricky Stromberg suffered a concussion in Tuesday’s practice, which pushed Ty Clary into center duties.

Stromberg had started eight of nine games this season at center, and Clary — who went through the program’s Senior Day ceremonies prior to kickoff — moved over after four consecutive starts at right guard.

The Razorbacks had some uncharacteristic mistakes offensively, Pittman said, like multiple false start penalties and complete breakdowns in protection. Alabama’s eight sacks were a season high and equaled its total in its previous two games against Auburn and at LSU.

Arkansas running back Trelon Smith, who finished with a team-high 69 rushing yards on 16 carries, said the Razorbacks did a poor job picking up the Crimson Tide’s blitzes and scoping out where pressure was coming from.

“I just tip my hat to Alabama,” Smith added. “They came out there and did what they were supposed to as far as defense. We weren’t on our Ps and Qs. We were missing blocks, letting them slip through.

The eight sacks allowed to Alabama were double Arkansas’ previous high in a game this season. The Razorbacks surrendered four each during a three-game stretch against Texas A&M, Tennessee and Florida.

“We just didn’t execute the game plan as well as we wanted to,” Arkansas receiver Mike Woods said. “That’s a great team over there. Props to Alabama, Coach (Nick) Saban. They’re the No. 1 team for a reason. Very disciplined, very sound football team, so props to them.”

Each of Arkansas’ five offensive penalties in the game belonged to the offensive line. Clary, Dalton Wagner, Beaux Limmer and Brady Latham were each penalized for false starts. Latham was also hit with a holding penalty in the third quarter that was declined by Alabama.

The Razorbacks have been flagged for false start 22 times this season, including six times in the last two games.

“I’m frustrated that we had illegal motion on the offensive line. But we didn’t have that problem at practice, so I don’t know if it was … I don’t know why it happened,” Pittman said. “One of them (Treylon) Burks fell down in motion and the timing of it was longer, so I guess he couldn’t hold it in there.

“Yeah, it’s frustrating. We hadn’t done it earlier. We hadn’t been a huge penalized team, but we’ve got to look into it and fix it.”