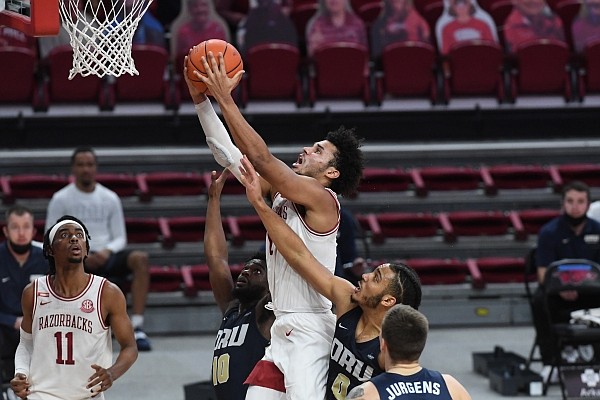 Arkansas forward Justin Smith grabs a rebound during the Razorbacks’ 87-76 win over Oral Roberts on Sunday, Dec. 20, 2020 at Bud Walton Arena in Fayetteville.

FAYETTEVILLE — Arkansas coach Eric Musselman isn’t sure he has coached a better offensive rebounder in his college coaching career than Justin Smith.

Smith, the graduate transfer from Indiana, was dominant on the glass Sunday against Oral Roberts, particularly on the offensive end, and led the Razorbacks to a come-from-behind 87-76 win over the Golden Eagles in Bud Walton Arena. Musselman elected to run with the 6-7 Smith at the 5 spot for much of the second half to place more speed on the floor, and the move paid dividends.

He finished with a season-high 22 points and career-high 17 rebounds — 10 offensive.

“I thought he was great. He can defensive rebound even better than what he’s done thus far,” Musselman said. “Defensively, it’s really hard to take him off the floor because he can guard 1-5. Because of his defensive ability, we really tend to rely on him.

“Then I thought offensively he stayed around that dunker spot and was really effective on the offensive boards and finishing around the rim in the second half.”

Smith’s 10 offensive rebounds were a career-high as well. His previous best in a game was six, which he recorded once with the Hoosiers during the 2018-19 season and again in the Razorbacks’ win over Texas-Arlington on Dec. 2.

In Arkansas’ previous four games, Smith had grabbed 11 Razorbacks misses. Twenty-seven of his 50 rebounds through seven games have come on the offensive end.

Smith was happy to hear Musselman praise his work and effort on the glass.

“I’d say it's definitely a combination of just athleticism and reading the ball,” Smith said of the key to offensive rebounding at a high rate. “When we shoot, usually it's from the perimeter, so it gives me a little more time to track the ball and how it's going to come off the rim. Then once I'm able to track the ball I'm able to use my athleticism to go up and get it.

“Coach has even been on me about defensive rebounding because he's like, ‘You have to use what you do on the offensive end and apply that to the defensive end.' That's something I'm working on currently."

But his afternoon didn’t begin smoothly.

The Razorbacks were minus-9 with Smith on the floor in his 18-plus minutes in the first half. He grabbed eight rebounds, but he was just 4 of 13 shooting, including 0 of 3 from 3-point range.

Smith entered the game 24 of 46 at the rim this season, and he had his struggles Sunday, too. According to Arkansas’ StatBroadcast system, Smith missed six layups prior to halftime. But he was much more efficient after the break.

He connected on 5 of 7 shots and exited the game for only 17 seconds. Smith tallied nine more rebounds as well, and the Razorbacks were plus-20 in his second-half run.

"I just started taking my time,” Smith said. “I think in the first half I started rushing, especially on those layups. I've got to make those. Those are gimmes. I think I responded well in the second half, just kind of taking my time and really focusing on the finish.

“Hopefully I can build on that going forward because I've already struggled with it this season and it needs to get better."

According to KenPom analytics, Smith has offensive rebounded 13.5% of Arkansas’ misses when on the floor this season. That mark ranks 75th nationally and eighth in the SEC among players who have played a minimum of 40% of their team’s minutes.

Desi Sills, who recorded a double-double with 16 points and 10 rebounds, was proud of Smith’s play in the win. Sills and Smith combined for 14 of the Razorbacks’ 24 offensive boards in the game.

“He did a hell of a job. He did his thing,” the junior guard said. “That's what we need Justin to do each and every night because when he is playing his game the way he's supposed to play, we're going to be tough to beat.

“We need Justin all the time. What he did tonight was remarkable and I feel like he can do it again each and every night if he comes out like he did today.”