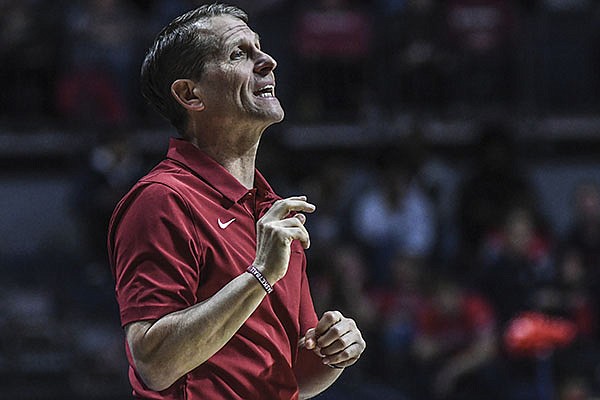 FAYETTEVILLE — Eric Musselman found himself staring at the final stats sheet from the Razorbacks' overtime home loss to Auburn on Tuesday when he returned home.

His wife, Danyelle, offered him a piece of advice as he scanned the numbers: "Get over yourself and get ready for Missouri."

That is just the approach Musselman says he has taken since Tuesday. And players, too, have tended to move past losses in a similar fashion this season, dropping two in a row only once.

Arkansas is 4-1 in games immediately following a loss, and two of the wins have come away from Bud Walton Arena - Ole Miss, Alabama. The Razorbacks (16-6, 4-5 SEC) hope to improve that mark Saturday against the Tigers and move back to .500 in conference.

"I think for us, everybody talks about taking one game at a time or whatever, but there’s only one thing we can control right now. It’s how do we come out and play against Missouri," Musselman said Thursday. "That’s kind of all we can control.

"Our guys have done an incredibly great job of not having hangover losses, where we lose and then it carries over to the next game and we lack energy."

In the Razorbacks' five games after a loss, they have scored at a 1.09 point-per-possession clip, according to HoopLens analytics, which is well above their .98 PPP rate for the season, and allowed 1.01 points per possession to Tulsa, Ole Miss, Mississippi State, TCU and Alabama.

Offensively, Arkansas has valued the basketball (12.7 percent turnover rate) and shot 36.8 percent from 3-point range in those games. On the defensive end, the Razorbacks have turned teams over on 20.1 percent of possessions and limited them to 27 percent beyond the arc.

Mason Jones and Jimmy Whitt, Arkansas' two leading scorers in SEC play, have typically turned in solid performances coming off of a loss this season. Jones is averaging 24.8 points and 4.4 assists per game in those instances, and Whitt puts up 17.6 points per game.

Jones, a junior guard from DeSoto, Texas, is coming off his second 40-point game of the year. He is one of three SEC players to add multiple 40-point outings in one season over the last 30 years, joining former Kentucky guard Jodie Meeks and Shaquille O'Neal, who starred at LSU.

"What Mason’s done is he’s played as well as anyone in the country of late," Musselman said. "And again, it’s hard. He’s worked, and I think he’s improved in so many areas."

Whitt, however, went scoreless for the first time in nearly two calendar years against Auburn and is not 100 percent healthy two days prior to returning to his hometown for the final time to face Missouri.

Battling an injured back that tightened up in the second half on Tuesday, Whitt recently received an injection and had an MRI, Musselman noted. Whitt is confident he will be ready to play Saturday.

"I'd like to go there and play well, but my biggest thing is going there and trying to get a win," said Whitt, who did not practice Wednesday or Thursday. "That's what matters to me at the end of the day. A win is going to go a lot farther for us than me going and playing well."

In terms of bouncing back from a loss, Whitt says the team carries a chip on its shoulder the next time out.

Senior forward Adrio Bailey added the key to getting back on the right track comes down to staying true to one another and sticking to the game plan laid out by the coaching staff.

"We kind of take it personal, take each game personal, because we want to win," said Bailey, averaging 6.3 points and 4.6 rebounds per game. "We've got our own goals of where we want to be in the league because of where (media voted) us. We're trying to overcome that.

"That's kind of our energy. We want to prove the doubters wrong."

Regularly after coming up short in a game, Musselman has praised his group for its fight and never-quit attitude. Both Missouri, which is 2-7 in SEC games, and Arkansas are hungry for a win, he said.

"I expect our team to come out and play with energy even though it’s an early start," added Musselman, whose team's shootaround is at 8 a.m. Saturday due to a Luke Combs concert in Mizzou Arena on Friday. "We haven’t had a lot of early starts this year, but it’s a game on the road with an early start."