Jones puts run of 30 on the line 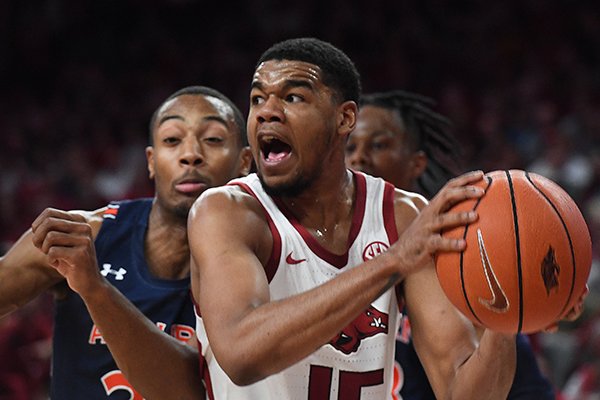 Arkansas' Mason Jones drives around an Auburn defender during a game Tuesday, Feb. 4, 2020, in Fayetteville.

COLUMBIA, Mo. -- Can Mason Jones make it four in a row today in Mizzou Arena?

Jones, a junior guard for the University of Arkansas, is the first Razorback to score 30 or more points in three consecutive games with 34 against South Carolina, 30 at Alabama and 40 against Auburn.

Missouri will try to put a stop to Jones' scoring rampage when the Tigers take on the Razorbacks.

"What Mason's done is he's played as well as anyone in the country of late," Arkansas Coach Eric Musselman said. "He's worked, and I think he's improved in so many areas. We've talked about it in the past after games. His ability as a ball-handler, his ability in one-on-one situations. His ability to draw free throws attempted."

Jones has hit 137 of 167 free throws and is averaging 20.7 points overall to lead the SEC in scoring. He's also the SEC's top scorer in conference games at 22.0 ppg.

"I think he's the best scorer in our league. I'm not saying that just because he's leading the league in scoring. I think he has a mentality to score the ball every time down, which is a great attribute to have."

Jones has scored 30 or more points in five games this season, including a career-high 41 against Tulsa.

"The streak that he's on right now is kind of crazy," Missouri guard Dru Smith said. "I've watched them play a few times, and he's definitely a great scorer.

"I don't know if we've seen anyone that scores as prolifically as he does. But we're excited for the challenge."

"I'm not shocked at all," Bailey said. "Throughout the summer, everybody watched Mason work. We all worked together. To finally see it play out for him and his success and the things he's doing in this league is very big time. People should look into that. He's a very special kid, and I'm not surprised by it at all."

Arkansas Coach Eric Musselman said with sophomore guard Isaiah Joe out of the lineup after he underwent arthroscopic surgery on his right knee Tuesday, the Razorbacks are making a lot of adjustments offensively.

Joe is averaging an SEC-best 3.8 three-point baskets per game and 16.0 points. He matched his career high with 34 points at Ole Miss.

"Right when I thought we had kind of figured out who we were, roles were clearly defined, we had the injury," Musselman said of Joe's absence. "So now we're kind of reinventing ourselves all of a sudden.

"All of a sudden now we're playing two bigs [Adrio Bailey and Reggie Chaney]. Because of the makeup of our team, we can't play five guards anymore. We don't have five guards to even throw out there, which was kind of a mismatch for other people that we could do for short stretches.

"So offensively we're going to add some new plays. We added three new plays prior to the Auburn game. We'll probably add another three or four [for Missouri] ... because we have to run different plays based on who we are right now."

Missouri forward Mitchell Smith, a 6-10 redshirt junior from Van Buren, led the Tigers with nine points and a career-high 11 rebounds Tuesday night in their 68-51 loss at Texas A&M.

Arkansas senior guard Jimmy Whitt is from Columbia, Mo., so he'll be playing back home today.

"You root for the guy," Missouri Coach Cuonzo Martin said. "I know the guy. I know his family. I recruited him some [at Missouri State], so I knew Jimmy. Good family. Good guy. I'm happy for his success."

Whitt is averaging a career-high 14.7 ppg.

Eric Musselman and Cuonzo Martin go way back. They first met more than 20 years ago in the Continental Basketball Association during the 1996-97 season.

Musselman was head coach of the Florida Beachdogs, who played in West Palm Beach. Martin played for the Grand Rapids (Mich.) Mackers.

"We had some intense games," Martin said last summer of the Beachdogs-Mackers matchups. "The good thing about Muss -- which I liked -- is that he talked trash a little bit as a coach on the floor. I enjoyed that."

"I don't do it now," Musselman said of talking to players on the opposing team. "Certainly in the pros you might let a guy know you're backed way off him or try to encourage an opposing player to shoot. Something like that."

Musselman said Martin was a challenge to play.

"Great competitor," Musselman said. "He could shoot the ball, and he was really, really tough. He was a really good basketball player."

Martin laughed when he was asked last summer whether he could repeat some of Musselman's trash talk.

"I can't necessarily share the words, but I looked forward to it," Martin said. "I was fresh out of college, and that was a new experience for me -- a coach talking trash.

"It was all in good fun. But his teams played hard, they were competitive. It was great. That kind of started the relationship. We'd laugh and joke in between games."

Missouri was called for 31 fouls at Texas A&M, and the Aggies hit 25 of 37 free throws. It was the most fouls called on Missouri since the 2000-01 season when the Tigers had 33 fouls against Illinois.

"Just don't do it," Missouri Coach Cuonzo Martin said when asked how to cut down on the fouls. "I don't want to be sarcastic, but there's a fine line. I think we were at a point earlier we were so aggressive in fouling, then we stopped fouling and weren't as aggressive and were giving up certain things.

"Now you try to get back to being aggressive. It's just a balance in the maturity of saying, 'Arm's length, maintain my spacing.' And that's it. It's simply that."

Arkansas Coach Eric Musselman said some advice from his wife, Danyelle, helped him focus on Missouri and not dwell on No. 11 Auburn's 79-76 victory over the Razorbacks in overtime Tuesday night.

"When I get home from the Auburn game, I was staring at the stat sheet," Musselman said. "My wife basically said, 'Get over yourself and get ready for Missouri.' "