Hogs get in trouble with fouls 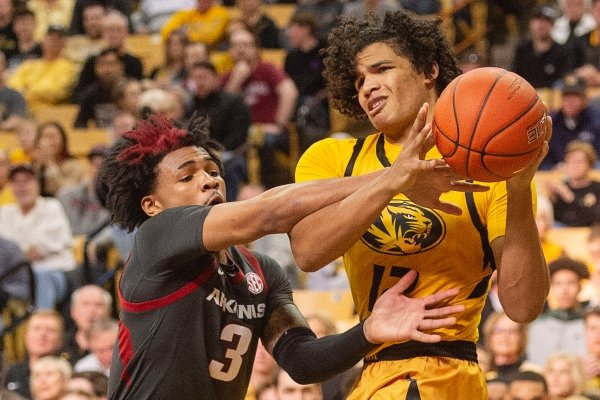 COLUMBIA, Mo. -- A visit Saturday to Mizzou Arena looked like the perfect time and place for the University of Arkansas to bounce back from an overtime loss to Auburn.

Instead of the Razorbacks getting a road victory after a loss as they did at Ole Miss and Alabama, the Tigers won 83-79 in overtime.

The Razorbacks have a quick turnaround with another road game at Tennessee (13-10, 5-5) on Tuesday night in Thompson-Boling Arena.

"If we don't rebound and we commit fouls, we're not going to win," Arkansas Coach Eric Musselman said. "I mean, guys have got to guard. You've got to guard your assignment.

"I don't know how many and-ones soft fouls we had. You can't come into a game and a guy scores a basket and you lightly foul him and then it turns into an old-school three-point play."

Rebounding has been an issue for the Razorbacks all season -- they came into the game with a minus-10.2 margin in SEC games -- but Missouri exceeded that with a 52-35 advantage.

The 6-10 Nikko and 6-10 Mitchell Smith, a redshirt junior from Van Buren, each had 11 rebounds to lead Missouri.

Arkansas forward Reggie Chaney, a 6-8 sophomore, also had 11 rebounds. No other Razorback had more than junior guard Mason Jones' five.

The Razorbacks outscored the Tigers 24-14 in points off turnovers, but that wasn't enough to offset Missouri hitting 34 of 44 free throws compared to 28 of 39 for Arkansas.

"If you don't rebound the ball and then foul when you defend, you're going to get a result that you don't like," Musselman said. "Defensively, we had some guys not bend their knees and get in a defensive stance."

The Razorbacks were called for 32 fouls as Chaney, Jones, Adrio Bailey and Jalen Harris fouled out.

It was the most fouls for Arkansas since the 2004 SEC Tournament, according to Hogstats.com, when the Razorbacks also had 32 and lost to South Carolina 91-81.

Arkansas -- with its top perimeter shooter, sophomore guard Isaiah Joe, missing a second consecutive game as he recovers from knee surgery -- matched a season-low in three-point baskets by hitting 3 of 16. The Razorbacks were 3 of 18 in a 66-60 victory over Northern Kentucky.

Musselman lamented his team's lack of ball movement and shot selection after the Razorbacks were 24 of 62 from the field (38.7%) and had more turnovers (14) than assists (8).

"Right now, we've got some things to figure out, but we're going to come back from this," Chaney said. "I know we will."

Senior guard Jimmy Whitt said the Razorbacks have time to get their season going in the right direction again after they started 14-2.

"I just think it comes down to we've got to come together in tough times when we're having adversity like this and dropping close ones," Whitt said. "It's not like we're coming in and just getting blown out."

Arkansas' last five losses have been by an average of 4.6 points, including the first time the Razorbacks dropped back-to-back overtime games, including to Auburn 79-76 on Tuesday in Walton Arena.

"It's coming down to late-game execution offensively and defensively and I just feel like we've given up either possessions on the defensive end or we've come down on offense and haven't gotten a really good look," Whitt said. "Those things have contributed to losses on our part."

Musselman was asked if the Razorbacks can fix what's ailing them -- fouling too much and not rebounding enough with a bigger starting lineup featuring Chaney and the 6-6 Bailey with Joe out -- with two days to practice before playing the Vols.

"All we can do as a coaching staff is try to put a game plan out as best we can and see if we can execute," Musselman said. "We've just to regroup and try to get ready to play Tennessee."