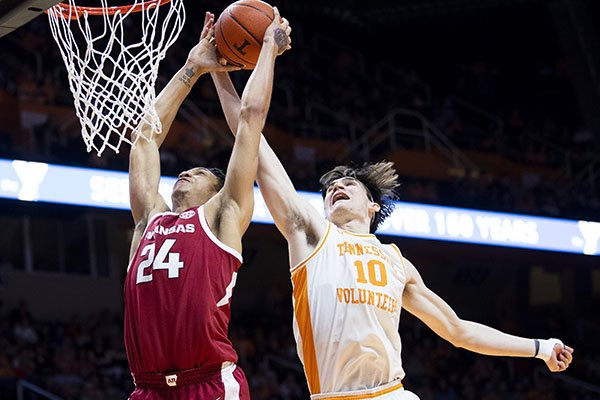 Arkansas, on the road at Tennessee, was blown out for the first time under first-year coach Eric Musselman, falling 82-61 in Thompson-Boling Arena. The Volunteers, 5-5 in SEC play entering the night, dropped the hammer on the lethargic Razorbacks, which prior to Tuesday had lost their first seven games by an average of 4.5 points.

If it could go wrong for Arkansas, it did. Much like Saturday at Missouri, the Razorbacks could not and did not defend without fouling or take care of the basketball. Those were the team’s two primary issues, and they set the tone for the remainder of the night.

In the first half, officials hit Arkansas with 14 fouls. Reggie Chaney and Adrio Bailey each had two, and seldom-used Ethan Henderson and Desi Sills were whistled for three apiece. And for only the third time this season, Jamario Bell, the former defensive end for the Razorbacks, hit the floor, and it was out of necessity.

Musselman also subbed in Bell with 12-plus minutes left in the second half and put Bailey and Chaney on the bench. That’s where things were for the Razorbacks in Knoxville. Henderson also played 17 minutes, the second most in his career.

In terms of valuing the basketball, it’s as if Arkansas has just forgotten how over the last few days. It turned the ball over 14 times at Missouri - seven by two of the team’s primary ballhandlers - and 14 more times against Tennessee. Just a lot of sloppy mistakes.

The Razorbacks' turnover rate (20.5) on Tuesday is their highest figure since the narrow win over Valparaiso in late December (23.5), and fourth worst of the season, per KenPom.

More than that, there are moments in which players simply cannot dribble and run at the same time. It’s fairly stunning to watch, and it has happened two games in a row now. Not to pick on Jones, who had a really rough night with nine points after coming off the bench for the first time this season, but early in the game he attempted to dribble drive baseline and get to the rim.

Instead, he tripped over his own feet and was double teamed, forced to call timeout to save possession. That is typically a bucket, potentially an and-1 for Jones. It was another one of those nights.

Arkansas’ core didn’t bring it offensively. Jones, coming off a 3 of 14 game against the Tigers over the weekend, was a non-factor. He finished 1 of 10 from the floor with three turnovers in 24 minutes. Musselman removed him from the game with less than 13 minutes to play and he didn't return.

On his first five touches, Jones missed two shots, turned the ball over, had the aforementioned stumble then committed a blatant player-control foul in which he extended his arm and sent a defender flying. It was as completely out of sync as he’s been all season.

Whitt and Sills, two of the team’s top three leading scorers in the loss, were big net negatives - minus-21 and minus-16, respectively. The two made just 6 of 27 shots, and Sills missed 12 of 14 attempts, including his last 10. Whitt scored a team-high 19 and Sills 11.

At the eight-minute mark in the first half, things looked to be going at least fairly well for Sills in terms of his jumper (he had three turnovers by this point). He had knocked down 2 of 3 3-point attempts and, suddenly, he was 8 of his last 15 beyond the arc dating back to the Auburn game. It went downhill from there.

Chaney was the only other Arkansas player in double figures with 10 on 4 of 4 around the rim. He added six rebounds, too, in 20 minutes. He and Bailey, though, were unable to stay on the floor, and it really hurt Arkansas, especially defensively.

Tennessee finished with eight layups in the win and added five dunks for good measure. The Vols scored roughly half of their points in the paint (40). Their bigs - John Fulkerson, Yves Pons, Olivier Nkamhoua - combined for 36 points and 18 rebounds, six offensive.

The Razorbacks' defensive efficiency rating of 120.3 is, unsurprisingly, their worst mark of the season, according to KenPom.

Arkansas' reality right now is that it is trending in the wrong direction overall and in some key areas, like decision making on the offensive end and defensive discipline. It is 1-6 in its last 7 league games, and Mississippi State rolls into Fayetteville on Saturday with their own NCAA Tournament hopes on the line.

Musselman has now lost three games in a row for the first time as a college head coach. That isn't going to sit well over the next few days. A fourth conference home loss this weekend wouldn't sit well with anyone, either.