Hogs set rotation in year of the pitcher 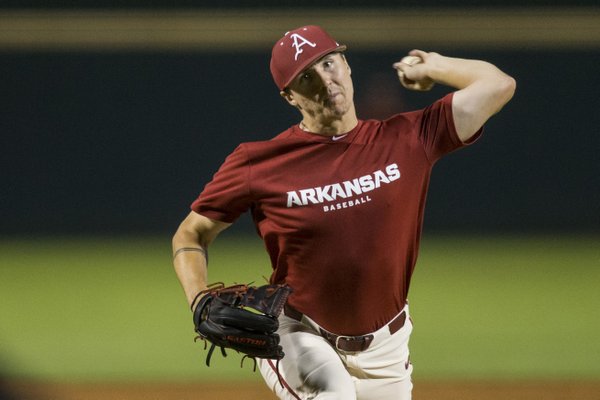 Patrick Wicklander pitches in the third inning vs Oklahoma Friday, Sept. 20, 2019, during an exhibition game at Baum-Walker Stadium in Fayetteville. Wicklander will start the 2020 season as the Razorbacks second starter.

FAYETTEVILLE — The year of the pitcher has arrived in the Southeastern Conference.

"It's the best pitching that's ever been in our league," Arkansas head coach Dave Van Horn said.

The SEC might be the deepest it's ever been at the starting pitcher position. Ten SEC teams - Missouri, Vanderbilt, Auburn, Tennessee, Mississippi State, Georgia, LSU, Texas A&M, South Carolina and Ole Miss - landed at least one pitcher on a preseason All-America team.

Add in Florida, a team that according to Van Horn has two weekend starters that could go in the first three rounds of the draft, and there is some impressive arm talent.

"It's not a good year to go into the league if you can't hit very well," Van Horn said.

Missing from those preseason accolades is Arkansas' pitching staff.

Noland started 19 games last year, posting a 3-5 record with a 4.02 ERA. Wicklander started 15 games for the Hogs last season with a 6-2 record and a 4.32 ERA. Both pitched during the Razorbacks' postseason run.

"Wick and (Noland) are guys we will look to to hopefully anchor our rotation," Arkansas pitching coach Matt Hobbs said.

Noland, who played football for the Razorbacks in the fall of 2018, was able to spend the entire offseason with the baseball team for the first time and has shown a more consistent fastball.

"I'm getting up there in velocity," Noland said, "sitting there above 90 (mph) consistently is just the main thing I want to improve on and I think I've shown that."

Wicklander improved in the weight room as well this offseason and has been battling his biggest challenge, consistency.

"He hasn't had a really good preseason so to speak," Van Horn said. "He gets his pitch count up too much. We need him to pound the strike zone. When he does he usually doesn't get hit too bad. I think he had 37 walks (last year). He's got to cut that in half. He does that, he's going to win a lot of games."

Wicklander knows his pitch count is high, but his focus is on winning the game.

"I just like to compete," Wicklander said. "Yeah I'll throw 100 pitches or so, but I just want to go out and compete. Do everything I can to help our team win."

Throwing 100 pitches will be off the table for Wicklander this weekend as Van Horn has said he will keep pitch counts to around 75 for all starters.

Van Horn has put Adams in pressure situations throughout the fall. He told the freshman from Springdale Har-Ber that he would be the Sunday starter before Adams' last start in spring scrimmages. Adams responded with a few rough innings against the starting Razorback batting order, but settled in later.

"I think he just showed a lot of confidence," Noland said. "(He) went out there and filled up the strike zone. For a young guy to come in and just fill up the zone, that's a big deal and he did a good job of that."

Arkansas will have other options to start as well. Hobbs said he likes to have six guys built up as starters. One who could fill that role is junior right hander Kole Ramage.

"He's kind of a wildcard for us right now," Van Horn said. "If you look at the numbers and the way he pitched the last three weeks he should be right there to start. He's pitched better than a couple of guys that are starting this weekend. What he gives us... if one of our starters gets in trouble early we can put him in and he can settle it down."

No matter who is on the mound for the Razorbacks they will have a weapon behind the plate in Casey Opitz. Opitz played in 53 games last year and is a calming presence behind the plate.

"He makes you feel like you're owning the game," Noland said. "I don't know what he does. I don't know how he does it, but he does a good job. Just having him back there gives you the confidence to just go out there and play the game."

The Razorbacks will face a starting rotation from Eastern Illinois this weekend that is spearheaded by hard-throwing Will Klein.

"The right hander that we will see Friday will be a very hard thrower," Van Horn said. "He'll be 95 (mph) plus most of the time. He was the closer last summer. A lot of velocity, but we're used to velocity."