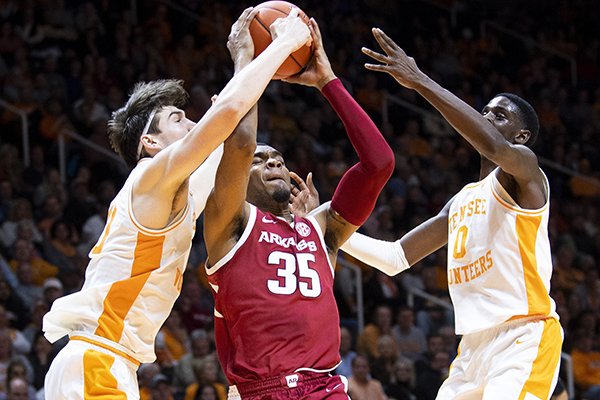 KNOXVILLE, Tenn.-- The injury depleted, undermanned and offensively challenged Arkansas Razorbacks finally ran into an opponent ready and able to stomp them in the Tennessee Volunteers on Tuesday.

The Razorbacks, with leading scorer Mason Jones held out of the starting lineup and limited to nine points in 24 minutes, got behind early and could not recover from a series of turnovers and sloppy offensive trips that led to season-low 30.6% shooting.

The Volunteers were more than happy to capitalize on the Razorbacks' dysfunction in an 82-61 victory before a crowd of 17,222 at Thompson-Boling Arena.

The Volunteers (14-10, 6-5 SEC), desperate to climb back into the SEC race, forced 14 turnovers and made the Razorbacks scramble to launch quality shots much of the night.

"I mean we were bobbling balls from the very beginning of the game," University of Arkansas Coach Eric Musselman said.

"I thought Tennessee played with more energy and played harder, and we didn't fight when things became difficult."

The Razorbacks (16-8, 4-7) had been in contention in every game this season, with their worst losses coming by seven points against Western Kentucky, Kentucky and Mississippi State. But their third loss in a row and sixth SEC setback in seven outings got ugly quickly.

Tennessee used a 13-3 run early in the game to jump ahead 16-6 and rarely trailed by less than 10 points the rest of the way.

Whitt said he was surprised the Razorbacks didn't play with the effort they've shown for much of the season.

"Yeah, especially with this group," he said. "But it's one of those things where you've got to go back and get it right. There's only so much talking you can do before everybody has to look themselves in the mirror and ask how much they want it."

Tennessee Coach Rick Barnes said the Vols were determined not to let Jones and the other Arkansas guards penetrate and create easy scoring opportunities and draw fouls.

"People are going to keep [driving] at us until we can prove that we can stop it," Barnes said. "I don't think there's any question that no one drives it any harder than these guys. They get that ball in a high percentage area and come at you really hard with it. We did a pretty good job of trying to keep it out of there."

Whitt led the Razorbacks with 19 points, which included an 11-of-16 performance from the free-throw line and 4-of-13 shooting from the field. Desi Sills added 11 points on 2-of-14 shooting. Reggie Chaney scored 10 points on 4-of-4 shooting and added 6 rebounds.

Tennessee freshman guard Santiago Vescovi scored 20 points on 6-of-10 shooting, which included a 3 for 4 night beyond the arc. Bowden added 16 points, John Fulkerson scored 14, Yves Pons had 12 and Davonte Gaines 10 for the Volunteers.

Jones did not start for the Razorbacks for the first time this season when he was healthy, and he had an off night with backcourt mate Isaiah Joe resting a knee injury back in Fayetteville.

"Isaiah's a great player," Musselman said. "We're just not deep, even with him. Then when you take any of our guys away you become a lot less ... we have no depth.

The Razorbacks went 5 of 16 from three-point range, led by 2 of 3 shooting from Adrio Bailey.

The Volunteers found their three-point stroke early against the nation's top three-point defense and played suffocating defense on Arkansas, which had trouble even handing the ball off screens for part of the game.

"I think we came out sloppy," Whitt said. "We were falling over ourselves. Either that or we couldn't keep our hands on the ball. Just little stuff. You've got to be locked in from the tip and I don't think we were."

Tennessee converted 6 of 16 three-point shots and put on a dunk fest in the second half against an Arkansas team that had played better defense earlier in the year.

Sills hit a three-pointer on an assist from Chaney to give Arkansas a 3-0 lead on its first possession. It went downhill from there for the Hogs, who shot 15 of 49 for the game, including 7 of 25 (28%) in the first half.

Tennessee's Bowden answered with a tying three-pointer a moment later and took the lead for good on a Bowden one-hand runner two minutes into the game.

UP NEXT Arkansas hosts Mississippi State at noon Saturday at Walton Arena in Fayetteville.