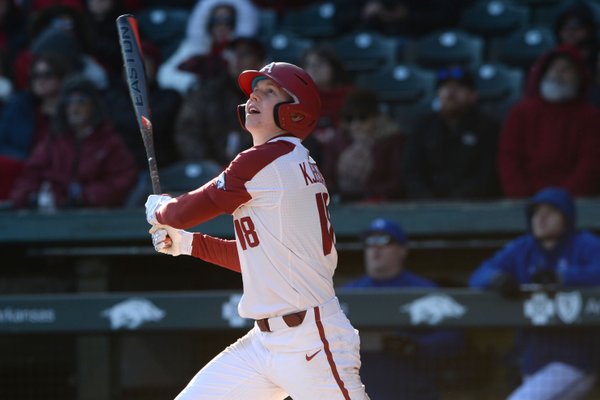 Arkansas right fielder Heston Kjerstad watches Friday, Feb. 14, 2020, as a home run sails over the left field wall during the seventh inning against Eastern Illinois at Baum-Walker Stadium in Fayetteville.

On an opening weekend that started off cold with temperatures hovering around the low 40s at first pitch, Connor Noland heated up the strike zone.

The sophomore from Greenwood, Ark., struck out a career-high 11 batters on 86 pitches over 6 1/3 innings. He allowed just two hits and one unearned run in the Razorbacks’ 5-1 win.

Noland pitched into the seventh inning before an error from shortstop Casey Martin allowed an Eastern Illinois runner to score.

Noland was helped by a power surge at the top of the lineup in the fifth inning. With Braydon Webb on first base, Christian Franklin turned on a pitch from junior right hander Will Klein and deposited the ball beyond the Arkansas bullpen in left field. The next batter, Heston Kjerstad, followed Franklin's home run with one of his own to extend the Razorbacks’ lead to 4-0.

Arkansas struck first in the game after Braydon Webb led off the bottom of the first inning with a walk. He moved to second on a wild pickoff attempt, then with one out Kjerstad singled to left to score Webb.

The score stayed 4-0 until the top of the seventh inning when Eastern Illinois center fielder Grant Emme scored after the fielding error by Martin.

Kjerstad responded in the bottom of the seventh with his second home run of the game, sneaking a ball just inside the left field foul pole.

The Razorbacks will be back in action Saturday at 2 p.m. Sophomore left hander Patrick Wicklander is expected to start for Arkansas. Eastern Illinois is likely to counter with junior left hander Trevor Nicholson.