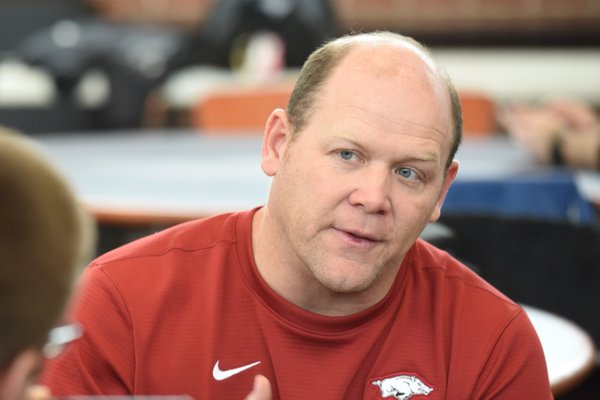 FAYETTEVILLE — The hit with veteran high school football coaches at their annual clinic was the same when Sam Pittman’s new coaches met with the media for an hour.

Barry Odom wowed the coaches at Hot Springs, just two days after impressing in the session with the media on the day after national signing day. The former Missouri head coach probably had his fill of media opportunities in Columbia. That’s generally the least favorite task for a head coach.

But you couldn’t tell it last week. He was first in and the last to finish media interviews. He stopped to chat one more time with the last media man in the building. And, two days later high school coaches said he was polished and impressive.

“Thank you for taking the time to talk to our players and help our fans get to know them,” Odom told a sports writer.

I wanted to tell him that’s part of the job, but I just shook his hand and thanked him for being gracious with his time.

Odom is a gem. I’d heard that from parents of Fayetteville High products playing at Missouri. They have nothing but good things to say about Odom.

I understood that after spending time with the new Arkansas defensive coordinator and safeties coach.

Odom won’t have to spend as much time with the media in his new job. It’s a good thing. He’s going to need every spare second to get the Arkansas defense on track. Seldom has that unit been any good over the last decade.

The lone exception was the 2014 Hogs that blanked LSU and Ole Miss in back-to-back games. That unit, coached by Robb Smith, featured Trey Flowers, Darius Philon, Martrell Spaight and Tevin Smith in what Smith called his “weak side triangle.” It provided a pass rush and sure tackling in space.

The pass rush is the key to what equalled good defense by the Razorbacks over the last 35 years. Or, let me be more specific, it is the ability to sack the quarterback. The stats prove it. I'm told that your chances of not allowing a score are improved 47 percent following a sack.

That’s what I wanted to talk about with Odom. I’ve thought the Tigers were good at disrupting the quarterback when I watched his units of late. He confirmed that, although last year’s Mizzou defense was probably one of his best coverage units and perhaps not as disruptive.

I gave Odom my constant on what makes for a good team, a golden nugget from no other than Bobby Petrino, known more for his offensive schemes.

During his time at Arkansas, Petrino said more than once, “The secret to winning in football – at any level – is simple: hit the other team’s quarterback and keep your quarterback from getting hit.”

Told that, Odom smiled, and then said, “There is a lot of value there.”

I went to the Arkansas record book. Here are the top sack totals with team records:

Those were all good teams. The 1995 team won the SEC West. The 1988 team won the last UA conference championship.

The 1998 sack leader was end C.J. McLain (7.0), but some of the other defensive linemen on that defense that included D. J. Cooper, Ryan Hale, Randy Garner and Melvin Bradley. That was a great line group, signed by Jim Washburn.

The sack totals have disappeared of late. No one has been in double figures since Bequette had 10 in 2011.

I wish I had presented this info to Odom last week. It would just confirm what he already knows, that getting pressure is the key to getting the Hogs back on the right track in the SEC.

It was refreshing to see the breakdown of the 24 signees (or grad transfers) in Pittman’s first class. There are 15 expected to play defense.

Seven could be loosely defined as defensive ends, although a couple might fall into that hybrid outside linebacker spot. Either way, they are pass rushers. Most are speedy.

Odom wasn’t ready to name their positions. He said that would be determined once they all make it to campus.

“We will know in June,” he said. “That’s the goal. We won’t see some of them until then.

“What we tried to do is recruit athletes. We will find a place for them. That’s what you better do in this league on both sides of the ball.”

Odom has a history of finding defensive ends to disrupt the passer.

“What you look for is that 240-pound athlete with the right skill set,” he said. “They might grow to 285 and then you might move some of them inside.”

I began to count the defensive end classes around the SEC every year since Petrino gave in to Steve Caldwell in one class with six outside pass rushers. Flowers came from that group. I noticed Odom once signed nine, or so I thought.

“I am not sure it was nine, but I do know that we did sign eight one year,” he said. “Maybe one or two were hybrid end/linebacker types. You can move those guys a lot of places. I think we moved one to tight end.

“The game of football is now about recruiting speed and athletes. You find a place for them.”

Pittman was quick to turn Odom loose with a big defensive number in this class.

“We talked about roster management immediately,” Odom said. “We knew the numbers we wanted to add. As far as some of them, they were skill guys who can play a lot of positions, athletic guys.”

Speed is the way to disrupt the quarterback. Odom was clear on that.

“We placed a premium on speed,” he said. “I know sometimes you think you can do things with scheme, but past history tells me that you better sign defensive ends who are athletic.”

It doesn’t always have to turn into big sack totals. The Tigers had only 19 sacks this season, last in the SEC. Arkansas was 12th with 21.

“This past season our sack totals were down, but we did have one of our best cover units,” he said. “And we did get some pressure.”

The Tigers were ninth in the nation in defensive pass efficiency with a 111.83 rating. They allowed just 179.3 yards per game.

The Tigers have been good on defense for quite some time. When Odom was defensive coordinator in 2015, they were ninth in total defense, second in tackles for losses.

If you want a good listen on Odom, find one of the latest Hog Pods, a Bo Mattingly interview. There are takes on what the process will be like to solidify the defense. And, I learned that Odom was recruited by Danny Ford and made an official visit. But the Ada, Okla., product didn't get an offer and signed with Missouri.

As for the state of the Arkansas defense, Odom didn't promise when things will turn around.

“I know we have a long way to go,” Odom said. “There are going to be times when it doesn’t look like progress, but there will be progress every day in lifestyle and establishing the DNA. I look forward to the process.”

It will include how the defensive players enter a meeting room, take the field and treat each other.

“It will be about getting them to be their best,” he said.

Asked for the goal by Mattingly, Odom simplified the answer.

“We want to hold the other team to less than what our offense can score,” he said.

I heard that from Petrino once, but I noted that his offense could score plenty. Odom was prepared for a deeper answer.

“Number one, we will be effort based on defense,” he said. “You’ve got to play fast, but to do that we have to know what we are doing. I know there will be a point where we look like we are doing that and to help we can show them clips of being a good defense.

Odom later added, “There is a fine line between being really good on defense and not very good at all.”

I know what that last part looked like. It sure wasn’t beautiful.

It’s not clear if the Hogs will start hitting the other team’s quarterbacks next season. When they do is probably when they begin to look just a little prettier.

“We have to be sound, hit and tackle,” he said. “There is a lot of value to that.

“We have to find a guy who can rush the quarterback. There is such a premium there. There are ways to do it whether it’s with a pressure or just winning a one-on-one battle.

“If it’s third and 7, if they are a little bit scared, there is a lot of value there. You can’t let the quarterback have time to read his third option.”

At that point, I was like those high school coaches. I was all in with Barry Odom. I don’t know when the quarterbacks playing Arkansas are going to be scared, but it’s coming.