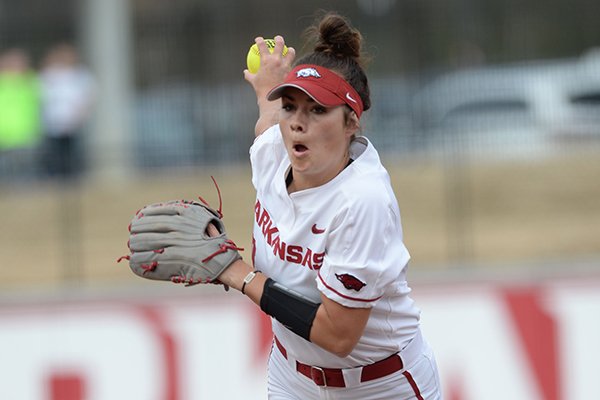 Arkansas softball improved to 7-1 on the season and pushed its winning streak to six games following an undefeated run at the Florida Gulf Coast Invitational over the weekend.

The Razorbacks’ first two scheduled games in the event against Memphis and Florida Gulf Coast were canceled on Friday, but they cruised on Saturday against Furman and Illinois-Chicago, winning 8-1 and 8-3, respectively, then edged FGCU 4-1 on Sunday.

Against UIC, catcher Kayla Green finished with three RBI and Malkin knocked in two with an RBI single to left after fouling off eight two-strike pitches.

Haff was strong in the circle in her start, striking out 12 and giving up just one earned run on six hits over six innings. Haff improved to 2-1 on the season.

In the weekend finale against FGCU, Green, who was named SEC player of the week on Monday, again came through with a pair of RBI as part of a 2-for-4 day. Hannah McEwen also tallied three hits in three at-bats. Arkansas scored all four of its runs in the first three innings.

In the circle, Storms moved to 4-0 this season after a 4 2/3-inning outing in which she scattered seven hits and allowed one earned run. She struck out four and did not issue a walk. Bloom earned her first save in the win, working the final 2 1/3 innings.

Arkansas returns to play on Thursday for the Razorback Invitational at Bogle Park. The Razorbacks are scheduled to face Boston University, South Dakota State, Marist and Montana over the course of four days.

First pitch against Boston on Thursday is slated for 4:30 p.m.