Struggling Hogs in a tough spot 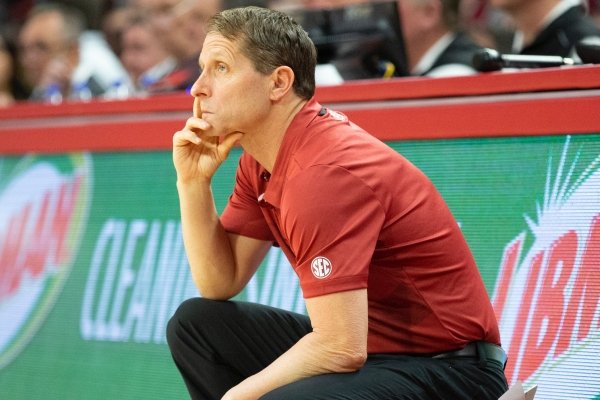 Arkansas coach Eric Musselman looks toward the playing floor in the Razorbacks' game against Mississippi State at Bud Walton Arena in Fayetteville on February 15, 2020.

GAINESVILLE, Fla. -- The University of Arkansas basketball team will try and break a four-game losing streak at an SEC venue where the Razorbacks haven't won in 25 years.

Arkansas Coach Eric Musselman, 55, was a head coach in the CBA with the Rapid City (S.D.) Thrillers at the time. Gators Coach Mike White, 42, was a senior at Jesuit High School in New Orleans.

Since then, Arkansas has lost 13 consecutive games at Florida.

Other games during the Gators' home winning streak against the Razorbacks have been blowouts, including Florida's 75-43 victory in 2011.

"But having said that, we've just got to get ready and compete and play as hard as we possibly can. Obviously, Florida's a really talented team and a team that plays really well at home and has a great student section."

Arkansas' losing streak started with Auburn's 79-76 overtime victory at Walton Arena. The Razorbacks then lost 83-79 in overtime at Missouri. It was the first time in 97 seasons that Arkansas lost back-to-back games in overtime.

The Razorbacks then lost 82-61 at Tennessee -- their only loss this season by more than seven points -- before another excruciating defeat, 78-77, to Mississippi State in Walton Arena when Abdul Ado scored on a tip-in with 0.6 seconds left.

"It's been difficult, just because there's been so many close games other than the Tennessee game," Musselman said. "Usually teams have two or three bad games on the road. We've had one. But this game [tonight] is a big concern for sure."

Arkansas junior guard Mason Jones, who is averaging 20.8 points to lead the SEC, said it's not too late for the Razorbacks to turn around their season.

"I definitely feel we've still got the chance to finish strong," Jones said after scoring 38 points against Mississippi State on Saturday. "Who knows? We might have a good path on the way. We might have a five-game winning streak. We just have to keep preparing one day at a time."

Jones has scored 30 or more points in six games this season, including 41 against Tulsa and 40 against Auburn. He's averaging 28.2 points over the past six games.

"I don't know how you guard the guy. The way that he shoots it off the catch, the way that he can create his own shot. His strength, his length, his ability to separate, to get his own jump shot and also get to the rim."

"Hopefully, whether it's in the next two to three games, we'll have him back," Musselman said. "Until then, we've just got to play as hard as we possibly can."

Jones said the Razorbacks are doing their best while waiting on Joe's return.

"Without Isaiah we just have to keep fighting and knowing that when Isaiah does come back, he's going to be 100%," Jones said.

Musselman has some familiarity with the Gators, who have three starters -- sophomores Andrew Nembhard, Noah Locke and Keyontae Johnson -- back from a team that beat Nevada 70-61 last season in an NCAA Tournament first-round matchup in Des Moines, Iowa.

"We understand that Johnson at that four spot's a really tough matchup, a great dribble-driver. He's an improved three-point shooter. Noah Locke, we know he's a dead-eye shooter."

The Gators have added 6-10 Kerry Blackshear, a graduate transfer from Virginia Tech who is averaging team-highs of 13.6 points and 7.7 rebounds.

Blackshear also took a recruiting visit to Arkansas, but the Orlando, Fla., native decided to go home and play for Florida.

Musselman managed a smile when asked how the season might be changed if Blackshear had transferred to Arkansas.

Musselman has used primarily a six-man rotation since Joe's injury, but nine Razorbacks played in the previous game against Mississippi State, including a minute for senior forward Jamario Bell, who joined the basketball team Nov. 30 after playing football for five years.

"We'll probably have different lineups than we've had some times during this season," Musselman said of tonight's game. "We've just got to keep searching and trying new things."

CHALK TALK Arkansas junior guard Mason Jones leads the nation in free throws made (172) and attempted (208) after hitting 18 of 21 against Mississippi State on Saturday. … The Razorbacks have lost four consecutive games since winning 82-78 at Alabama onFeb. 1. … Razorbacks senior forward Adrio Bailey is shooting 46.2% on three-pointers (12 of 26) after hitting 2 of 3 against Mississippi State. He’s shooting 50% on three-pointers (8 of 16) in SEC games. … Arkansas continues to lead the nation in three-point defense at 23.5%. … Florida sophomore forward Keyontae Johnson had 20 points and 12 rebounds in the Gators’ 66-50 victory over the Razorbacks in the SEC Tournament last season.