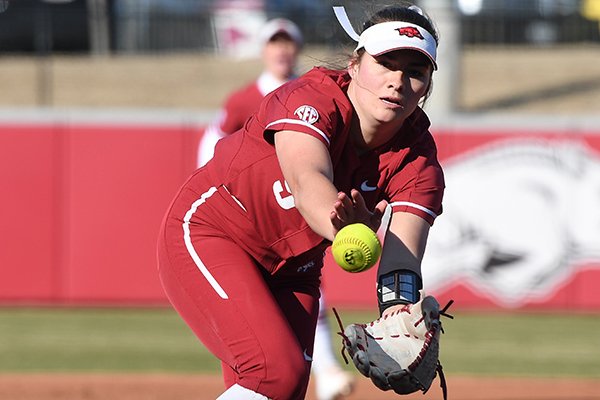 Arkansas pitcher Autumn Storms fields during a game against Boston on Thursday, Feb. 20, 2020, in Fayetteville.

Senior pitcher Autumn Storms improved to 7-0 this season and struck out nine in just four innings of work.

Arkansas' offense was jumpstarted by Huffine, who was slotted in the ninth position of the lineup, as she laced a two-run home run to left in the third. Later in the inning with a runner on first, junior Braxton Burnside drove a line drive double off the left-field wall to go up 3-0. Junior Danielle Gibson capitalized with a liner into left to cap off the four-run third.

After Marist cut the lead to 4-1 in the top of the sixth inning, junior Ryan Jackson answered by hitting a solo home run in the bottom of the inning to make it 5-1 Arkansas

Burnside and junior Kayla Green each had two hits for the Razorbacks.