Whitt pulls out of midrange slump 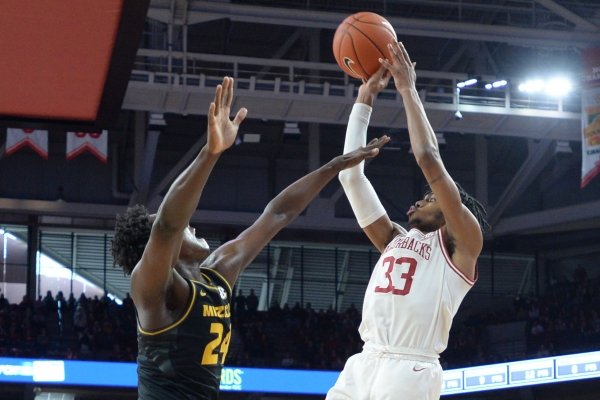 FAYETTEVILLE — Jimmy Whitt had fallen into something of a shooting slump during Arkansas' five-game losing streak with sharpshooter Isaiah Joe out.

His struggles began immediately after his second-best scoring performance of the season at Alabama when he poured in 26 points on 11 of 19 from the floor, aiding Mason Jones' 30-point outing. Whitt lived in the paint against the Crimson Tide, hitting 9 of 12 attempts.

Over the Razorbacks' next five games, though, Whitt made just 18 of 55 (32.7 percent) shots and seemingly could not get into a rhythm in the midrange, the area of the floor he owned for a majority of the season.

Through January, he had connected on 47.8 percent of midrange looks (66 of 138), according to shot chart data collected throughout the season. In Joe's absence, however, the floor became much more compact on the offensive end for the Razorbacks, and Whitt found it difficult to get to his spots.

Saturday, in Joe's return from injury, Whitt appeared to get back into a groove with 14 points against Missouri. He was one of five Arkansas players to reach double figures in the 78-68 win in Bud Walton Arena.

"When you add another perimeter threat it just opens up things for everybody on the team," Razorbacks coach Eric Musselman said Monday. "Certainly if you're an interior player, when you have two 3-point threats, like (Joe and Jones) are, and then Desi (Sills) has been shooting the ball really well like the last 10 games or whatever it's been as far as you look at his body of work, it opens up for Jimmy and Adrio (Bailey) inside, or whoever we have inside."

Whitt finished the game 6 of 12 from the floor, but he was efficient on his 10 jumpshots, knocking down six. Four of his buckets were from the middle of the floor below the free throw line.

He finished 1 of 3 and 1 of 2 on the left and right sides of the lane, respectively.

In the six games Joe missed with a knee injury, Whitt was 8 of 20 on jumpers left of the lane, 5 of 15 in the middle of the floor and a troubling 1 of 11 on the right, where he was shooting 42.1 percent on the season entering the month.

Seven minutes into Saturday's game, Whitt had buried three jumpers, all in the lane. He steadied Arkansas for a stretch after Missouri jumped out to a 16-9 lead. Alongside Joe, he scored 10 points in the first half, giving the Razorbacks their first halftime lead since Jan. 25 vs. TCU.

"He didn’t let it overcome him," said Bailey, who added 11 points, five rebounds, two steals and a block against Missouri. "He overcame it, and he came ready to play."

Whitt's production will be vital down the stretch for the Razorbacks, who are on the outside looking in at the moment in terms of the NCAA Tournament, according to various bracketologists. In Arkansas' 17 wins this season, Whitt is averaging 15.2 points on 53.4 percent shooting.

Whitt, who has played a team-high 1,005 minutes in 2019-20, was on the floor for all but two of Arkansas' 69 offensive possessions against Missouri. The Razorbacks scored at a 1.16 point-per-possession clip with him in the lineup, according to HoopLens.

"I feel like Jimmy, he knew his role and he played his role well," Bailey said. "He got to his spots and he got going. He came up with some big shots when we needed him.

"I feel like he dug himself out that little slump he was in. He stayed confident."