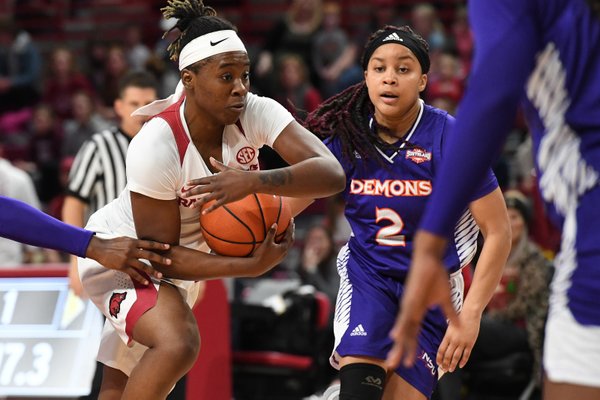 Arkansas' A'Tyanna Gaulden drives to the basket in front of Northwestern State's Tristen Washington Sunday Dec. 15, 2019 at Bud Walton Arena in Fayetteville. Gaulden has been a spark plug off the bench for the No. 20 Arkansas women’s basketball team, averaging 10.8 points, 3 rebounds and 2.6 assists in her last five games.

FAYETTEVILLE -- A'Tyanna Gaulden's grandmother had trouble pronouncing her first name, so that's where her nickname of "I-T" was born.

With the way the redshirt junior has been playing lately, opponents likely know her name well.

Gaulden has been a spark plug off the bench for the No. 20 University of Arkansas women's basketball team, averaging 10.8 points, 3 rebounds and 2.6 assists in her past five games. She's also made 17 of 24 shots (71%) from the floor.

Her numbers have risen as the 5-7 guard has recovered from a second surgery on her left knee, Razorbacks Coach Mike Neighbors said.

[Video not showing up above? Click here to watch » https://www.youtube.com/watch?v=VPHWSbajYYo]

"You look at how she's not turning it over as much and her shooting percentage is going up," Neighbors said. "And those numbers correlate to how much better she's feeling. It's especially big for a player who depends on her ability to go by people."

Gaulden said she's about "80%" in her recovery from surgery in August to repair a torn meniscus in her left knee, but Neighbors said she's getting back the explosive quickness that made her a top-25 recruit out of high school.

"It's just my confidence getting better," said Gaulden, who sat out the 2017-18 season after transferring from Florida State.

The timing couldn't be better as Arkansas (12-1) opens SEC play tonight against No. 11 Texas A&M, the preseason pick by the coaches to win the league. Tipoff is set for 8 p.m. in Walton Arena.

Neighbors said having the combination of freshman Makayla Daniels and Gaulden at point guard helps a coach sleep better.

"The two have settled into a nice duo, if you will," he said. "They pull for each other and push each other in practice.

That's exactly what happened in Sunday's game against Tennessee-Martin.

Daniels struggled with early turnovers, but Gaulden entered and picked up the pace. She hit a stepback jumper, then blew past a defender for a layup. In a six-minute span, Gaulden hit all 3 shots she took from the floor, scored 6 points, grabbed 3 rebounds and added an assist. She finished with 12 points, which was her fourth consecutive game scoring in double figures.

Daniels and Gaulden have been on the floor together briefly, but it's something Neighbors has considered doing more.

"That could be something we look at going forward," he said.

Gaulden's troubles with her knee started last season when she missed seven SEC games because of a meniscus issue, but she returned to help Arkansas make a run to the SEC Tournament finals and into the WNIT.

She appeared to be healthy for her junior season before she tore her meniscus again in the same knee and had surgery in August.

Neighbors said they took the rehab process more slowly this time, but Gaulden has regained her health at the perfect time for the Razorbacks.

"It was really hard on her," Neighbors said. "You could tell she was really frustrated at times. But she's been great, and that's a testament to her maturity.

"We're all proud of how she's stuck with it. And her production the last five games might be the best five-game span she's had since being a college player."

Gaulden agreed the process has been difficult.

"At the beginning, I didn't fully understand," Gaulden said. "I was like, 'Man, I'm working hard.' I had to give my knee time to catch up with me because my mind was going a lot faster than my body was."

"I don't care where I play, I'm just that energy-giver," Gaulden said with a laugh. "It doesn't matter if I'm starting or if I'm coming off the bench. If I'm coming out here and making my teammates better, that's all I really care about. All I want to do is win."

Neighbors said Gaulden's giving nature shows on and off the floor.

"She's a sweet, caring kid," Neighbors said. "She cares about other people and picks others up. That was what made her valuable to this team even when she was hurt."

NOTABLE Has been efficient averaging almost 7 points, 3 assists and 2 rebounds in 16 minutes of playing time per game this season, but that’s gone up significantly recently as she recovered from a second knee surgery. She’s averaged 13 points, 3.8 rebounds and 3.3 assists in her last four games. … Scored in double figured four times last season and averaged 5 points and more than 2 assists in 30 games and adveraged more than 20 minutes per game off the bench. … Missed seven SEC games because of an injury but returned late to help the Razorbacks’ postseason run. … Redshirted during the 2017-18 season after transferring from Florida State. … Played in 21 games but in a limited role as a freshman at Florida State. … Was rated as the No 23 player in the country by ESPBNW in the 2016 recruiting class … Earned Atlanta Journal Constitution Player of the Year honors her senior year at Americus Sumpter High School in Ocilla, Ga.

COACH Mike Neighbors (47-34) in his third season at Arkansas)

CHALK TALK Both Arkansas (No. 20) and Texas A&M (No. 11) remained in the same spots in this week’s AP women’s college basketball poll. … Arkansas snapped a four-game losing streak to the Aggies with its victory in last year’s Southeastern Conference tournament. … The Aggies led by former Razorbacks coach Gary Blair, come to town to open Southeastern Conference play. … Blair recently surpassed 800 career victories and started the season ranked sixth in wins among active coaches. … The Aggies are led by junior guard Chennedy Carter, who averages 22.8 points per game, which leads the SEC. … The Razorbacks are currently rated No. 1 in the country in points per possession, 3-point percentage defense and free throw throw attempted and made. They are also No. 10 in the country in turnovers, just behind Connecticut. … Arkansas begins Southeastern Conference play healthier as senior Kiara Williams, who led the Razorbacks in rebounding a year ago, has played in three consecutive games after being out with an injury. Destinee Oberg, a 6-3 freshman, was also sidelined with an injuryand made her Razorbacks debut on Sunday against Tennessee-Martin. … Arkansas’ 12-1 start is the best since 2013-14 when it began the season with 13 consecutive wins. … The Razorbacks come into the SEC opener riding a seven-game winning streak. … Texas A&M has also won seven in a row, after losing to No. 12 Florida State on Dec. 1.