State of the Hogs: Veteran coaches like what they see of Musselman 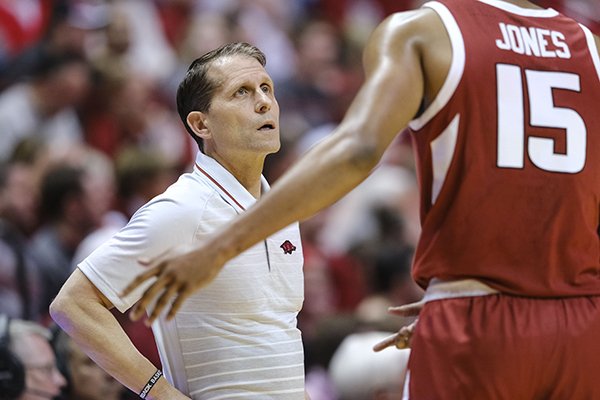 Pat Foster and James Dickey have observed – twice side-by-side in the stands – as Musselman has built the Razorbacks into one of the surprise teams at the start of the SEC season. They have been impressed.

The Hogs play host to Texas A&M on Saturday at 6 p.m. in the SEC opener at Bud Walton Arena.

“He’s got a good team. He’s got two really good players in Mason Jones and Isaiah Joe, but the rest of the team is very good, too. They are very good support players, each with one or two things they do well.”

Dickey was a head coach at Texas Tech and Houston. Like Foster, he worked for many seasons as an Eddie Sutton assistant.

“Eric has done a tremendous job,” Dickey said. “Those players have really bought in.

“What I’ve seen, they play tenacious defense, play with discipline and they play extremely hard.”

Foster, 80, lives in Fayetteville and attends most games. A native of Emerson, he was a three-year letterman for the Razorbacks and an All-Southwest Conference selection in 1961.

That the Hogs are 11-1 just one year into the Musselman era is not a surprise to Foster. He bristles when some suggested last spring that Musselman’s prediction of an NCAA Tournament trip was just hype to sell tickets.

“No, he inherited a good team,” Foster said. “Jimmy Counce said the same thing you just said (about selling tickets) and that’s a fallacy.

“There are two potential pros (in Jones and Joe) on this team. You have two pros on your team; you can compete in any league. Jones and Joe are beyond good. They are going to be an NCAA Tournament team.”

But having talent doesn’t always compute to having a good team. Foster points to the defense as the key to the great start.

“This team is built on defense,” Foster said. “This is the closest thing to what Eddie Sutton did here in a long time. They are very good on defense. They do it for the entire length of a game.”

Foster pointed to the comeback victory over Indiana when Arkansas rallied from 11 down in the second half to win 71-64.

“They held (Indiana) to one field goal in the last nine minutes,” Foster said. “You are not going to mill around on the perimeter and get a shot. You can get a shot, but you better do something.

“The secret to that is to get all five players playing at the same time. You watch the weak side defense; everyone is ready to go. People don’t cut without the ball on them. They don’t give up backdoor plays.”

“I went with Coach Foster and Jimmy (Counce),” he said. “I really enjoyed it. I know Eric and also I’m very close to some of his assistants. I’m really close to Corey Williams and I know Chris Crutchfield well. That’s a quality staff.”

Dickey is also high Hunter Yurachek, the Arkansas athletics director who hired Musselman. Dickey was head coach at Houston from 2010-14 when Yurachek was second in command in athletic administration for the Cougars.

“I worked with Hunter and think a lot of him,” Dickey said. “He’s done well at Arkansas. I’m a fan of his.”

Dickey said his relationship with Musselman is mostly reputation.

“I had two close friends who worked for his dad and they knew Eric,” Dickey said. “I followed him because of that. I knew Johnny Jones well, who hired Eric at LSU. He’s well respected.”

Dickey didn’t object to a critique of Musselman’s defensive style.

“To put it simply, they guard you,” Dickey said. “That’s all you need to say.”

“They have great philosophy on defense,” he said. “They play with high hands, they challenge you and have a great awareness. They look for an opportunity to take a charge. They get on the floor (for loose balls) and give up their body.

“This team is not blessed with great size, but they work and rebound. Against a big Indiana team, they neutralized inside strength.”

“Jones and Joe are deadly shooters,” he said. “You can’t leave them open. But they move without the ball. They don’t stand around. Their entire team plays with great space.”

Foster said one of the strengths of the Musselman defense is critical in today’s game.

“So much now is the pick and roll,” Foster said. “They certainly play it well. The key is a very coordinated effort on the part of all players.

“Offensively, it’s the pro approach. He gives players freedom to take shots. There is no fear.”

“They did, but Eddie was restrictive on offense,” Foster said, noting there was no shot clock in the 1970s. “I don’t mean that as a negative. It was the Oklahoma State way with Coach (Henry) Iba. It worked.

“With the shot clock, Eddie loosened up. Delph had great range. Brewer had range, too, but he was so good at taking the ball to the basket. He had the range, but didn’t show it.

“Joe and Jones have that kind of range. Then, you have Jimmy Whitt, who fits perfectly with those two shooters. He drives and takes what they give him, or he pitches it to the two shooters. He’s so good with that kick out.

“Desi Sills does a lot of things, too. I think the three he hit from the corner against Indiana was the key to that victory. They had to have it.”

“The last game I attended, there were some of my friends there who are NBA scouts,” Dickey said. “They were there to see them. If those particular scouts are there, then there are pro players there.”