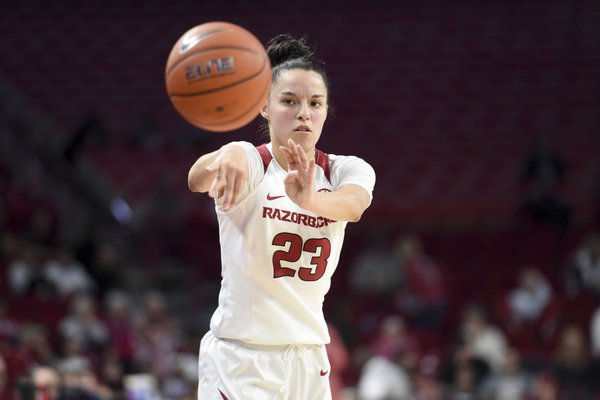 Arkansas guard Amber Ramirez (23) passes, Sunday, December 29, 2019 during a basketball game at Bud Walton Arena in Fayetteville. Ramirez had 25 points en route to the Razorbacks 86-70 victory over the Auburn Tigers.

AUBURN, Ala. — Amber Ramirez had four of her seven 3-pointers in the first quarter en route to a 25-point outing and No. 23 Arkansas cruised to an 86-70 win over Auburn on Sunday.

Chelsea Dungee, who added 19 points, had seven of her nine first-quarter points to cap off a 10-point run for a 12-9 lead midway through the first quarter. After an Auburn basket, Ramirez scored the next 11 points, including 3-pointers on three consecutive possessions. Her 3-pointer in the final minute made it 26-12 after one quarter.

The lead stayed in double figures the rest of the way. It was 44-27 at the half as Ramirez and Dungee combined for 26 points.

Makayla Daniels added 13 points for the Razorbacks (13-2, 1-1 Southeastern Conference), who bounced back after losing their league-opener to No. 11 Texas A&M.

Daisa Alexander and Brooke Moore had 19 points apiece for the Tigers (6-7, 0-2), who scored the last 11 points of the game as Arkansas had nine turnovers in the fourth quarter.