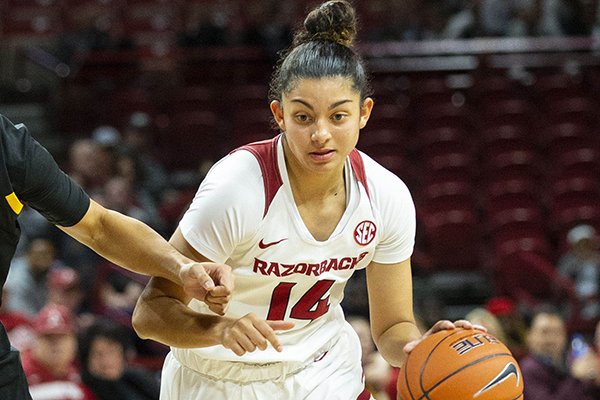 The Arkansas women's basketball team will continue to be without some senior leadership during the 2019-20 season.

Mason, a 5-9 guard from Mason, Ohio, tore a tendon in her foot during the offseason and has not played in a game this season.

Mason figured to be an important piece to the Razorbacks' season after she shot better than 41 percent from the field last year and just under 39 percent from 3-point range.

Both Neighbors and Mason knew that redshirting was a possibility, but they wanted to see how the healing process unfolded.

"It's something we talked about from the beginning," Neighbors said. "She had an injury that requires some time to heal, some time to evaluate and see how it goes. It's gone really well, but it hasn't gone as fast."

Mason has handled the entire situation like an adult who is looking toward their future, not just right now, Neighbors added.

"It was very thought out," he said. "She's got a computer laptop full of questions. We've been talking about it every week since it happened."

With Mason redshirting the Razorbacks have been able to use her in different ways.

The Razorbacks have used Mason to prepare for a tough matchup tonight at South Carolina against the No. 4 Gamecocks.

Neighbors' squad beat South Carolina for the first time with him at the helm in the 2019 SEC Tournament, but the Razorbacks will have to play well to beat the Gamecocks this time around.

The Razorbacks are led by redshirt junior guard Chelsea Dungee, who is third in the SEC in scoring at 19.7 points per game.

The game will tip off at 6 p.m. on SEC Network+. The Razorbacks return home Sunday to face Missouri at 2 p.m.