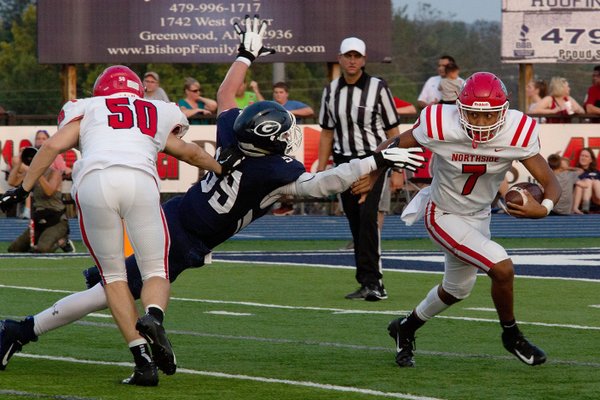 His brother, Morgan Hanna, accepted a preferred walk-on offer from Arkansas as a defensive end and is a redshirt freshman.

Jordan Hanna, 6-1, 195 pounds, received an offer from Southern Miss on Dec. 31. He played mostly as a standup defensive end and recorded 118 tackles, 16 tackles for loss, 9 sacks, 20 quarterback hurries, a recovered fumble and a forced fumble for the Class 6A Bulldogs.

Greenwood Coach Rick Jones believes Hanna will play on the edge in college.

“That’s sort of come a position in itself," Jones said. "Guys that can play up or play down. You can make four down when you’re playing three down personnel and I think that’s what he’s best suited for. He has a great motor and has a good frame.”

Jones compares the younger Hanna’s upside to his brother.

“A lot like Morgan, I think his best football is in front of him,” Jones said. “He just has to continue to work hard get bigger and stronger.”

Hanna is drawing interest from Colorado, Missouri, Wake Forest, Tulsa, Middle Tennessee, UNLV and Toledo, and is on Arkansas' radar.

“When I got that (offer) I was duck hunting and I had just woke up and I was like, 'Wow.' I was rally blown away by it,” Hanna said. “It caught me off guard because when you’re playing football you don’t really realize a goal or anything like that you’re just playing football, but that just comes along with that. It’s a just a good feeling.”

Hanna, who plays linebacker his senior season, was able to create havoc despite being undersized on the line.

“I’m only 195 pounds on the defensive line and sometimes that can be daunting, but you just have to use your technique and skills,” he said.

He credited his standup position for helping him be so productive.

“It gives a little bit more vision and I stand back even a little bit or make it wider so that offensive lineman has to step towards me so I can just react off him,” Hanna said.

Hanna is also a standout in wrestling. Numerous coaches and players credit wrestling for success on the football field. For instance, former NFL superstar linebacker Ray Lewis was a Florida Class 4A state champion wrestler in high school

Greenwood wrestling coach John Kincade has been coaching Hanna in USA Wrestling and in high school.

“Jordan has been wrestling for me for about eight years,” Kincade said. “He ended up winning the state championship in youth wrestling. I took him to Independence, Missouri for the national tournament a couple different times when he was in junior high and he finished fourth one year and finished fifth another year.”

Hanna started for Greenwood’s wrestling team as a freshman at 170 pounds and wrestled in the 182-pound weight division as a sophomore. An injury forced him out of last year's state tournament.

“I really believe it costs us the state championship,” Kincade said. “We ended up finishing third, one point behind second. So he would’ve made a big difference because he would’ve definitely placed in the state tournament.”

Hanna said it would be nice to be reunited with is brother, but said he’ll think hard about all opportunities.

Jones expects more schools to get involved after Hanna is seen in the spring and in camps during the summer. Hanna’s best football is ahead of him.

“That’s what I like about him, he’s a long ways from being a finished product,” Jones said.