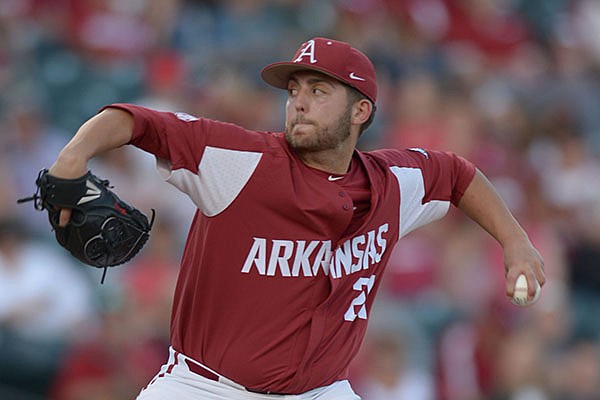 Arkansas pitcher Kacey Murphy throws during a game against Alabama on Saturday, April 28, 2018, in Fayetteville.

FAYETTEVILLE — Two of the most successful Arkansas pitchers of the past decade have joined the Razorbacks’ baseball coaching staff for the 2020 season.

DJ Baxendale and Kacey Murphy were recently brought on as student assistant coaches who will work with pitchers. Baxendale (communications) and Murphy (psychology) will finish their undergraduate degrees while helping coach.

Both have been shadowing Arkansas pitching coach Matt Hobbs this week after players returned from the university’s holiday break. Baxendale and Murphy said their gameday roles have yet to be defined, but it is expected that one will work in the bullpen and the other in the dugout.

Baxendale, 29, pitched at Arkansas from 2010-12 and was the team’s No. 1 pitcher during the run to the semifinals of the College World Series in 2012. He was drafted in the 10th round by the Minnesota Twins that year and has spent the past eight seasons playing minor league baseball for the organization, including the past four seasons for the Twins’ Class AAA affiliate in Rochester, N.Y.

“I thought I had given to the game about all I could give from a player’s standpoint,” Baxendale said. “It was time for a change and it felt right. A lot of times you hear about guys making a hard decision, but for me it wasn’t that difficult. It was time to transition into being a coach.”

Murphy, who will turn 23 next week, pitched for the Razorbacks from 2016-18 and was the No. 2 starter on Arkansas’ national runner-up team in 2018. He was drafted in the 11th round by the Detroit Tigers two years ago and retired from playing baseball midway through last season.

“I love the game and it wasn’t like I was trying to get away or escape from the game,” Murphy said. “It was more for my personal reasons. I want to stay involved. That’s why I asked to get back in here and work with guys.”

As members of two of Arkansas’ best teams in the Coach Dave Van Horn era, both said they feel like they have knowledge that can be beneficial to players this year.

“I think we can help greatly and I think we can help in different ways,” said Murphy, who still has former teammates on the roster. “Everyone knows DJ and what he’s done for the program. We had two different roles. Yeah, we were both starting pitchers, but we were two different guys. DJ was a Friday night guy, broke records and stuff like that, and I was more of a guy that was under the radar, pitched behind Blaine Knight. DJ can help these guys who are getting recognition real quick and I can help guys that have a lack of confidence in the beginning and stuff like that.”

“Having someone who has been there and done what you strive to do is always a valuable asset,” Baxendale said. “When you look at professional teams they’re always looking for that veteran feel to the team. Without being able to play and perform, I would like to mentor and give that experience feel like, ‘How would I handle myself in certain situations?’ I think the experience will play a big role for Kacey and myself, to impart some of that wisdom.”

Baxendale said he hopes to get into college coaching, while Murphy said his future plans are to work with athletes in a role similar to that of a sports psychologist.

They effectively replace two former Razorback players who took jobs elsewhere during the offseason. Jared Gates was hired as a volunteer assistant coach at Central Arkansas after spending last season as a student assistant at Arkansas, and Doug Willey was hired as a pitching coach for the Chicago Cubs’ rookie affiliate in Mesa, Ariz., after spending the past two seasons as a graduate assistant.