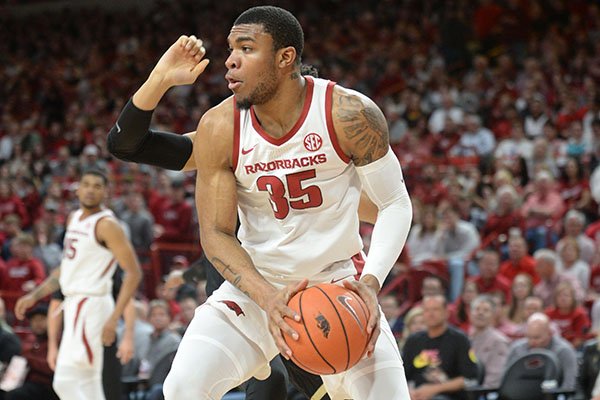 Arkansas forward Reggie Chaney looks to drive during a game against Vanderbilt on Wednesday, Jan. 15, 2020, in Fayetteville.

FAYETTEVILLE -- University of Arkansas forward Reggie Chaney scored more points against Vanderbilt on Wednesday night than he did in the previous five games combined.

Chaney, a 6-8 sophomore, scored 14 points to match his career high and help the Razorbacks beat the Commodores 75-55 at Walton Arena.

"Reggie was awesome," Arkansas Coach Eric Musselman said. "Really proud of how he finished around the rim, and I thought he played with great intensity on the backboards as well."

The previous five games Chaney combined for 11 points as his scoring average dropped to 2.8. Playing 18 minutes against Texas A&M, LSU and Ole Miss, he had 2 points and 4 turnovers without a rebound and a costly technical foul.

"It felt really good just to help my team out," Chaney said of bouncing back against Vanderbilt. "The last couple of games I know I've been struggling, but just to come out and be ready, it felt real good."

[Video not showing up above? Click here to watch » https://www.youtube.com/watch?v=_VFVgV6pusw]

Chaney provided a surprising scoring surge along with senior guard Jimmy Whitt -- who led the Razorbacks with a career-high 30 points -- as Vanderbilt kept Mason Jones and Isaiah Joe in check.

Jones came into the game averaging 19.4 points to lead the Razorbacks and Joe was second at 18.2, but they were held to a combined 13 points by the Commodores. Joe scored 12 points and Jones scored one point.

"The scouting report was let those guys [Whitt and Chaney] beat us if they can," Commodores Coach Jerry Stackhouse said. "They had not played up to that level that they could beat us.

"Our main concerns were obviously Isaiah Joe shooting the basketball and Mason Jones. But [Whitt and Chaney] did what they had to do and we didn't give them the resistance that's necessary."

Chaney missed the first three games this season because of a suspension and has played inconsistently since joining the rotation, scoring six points each in four games, but going scoreless five times.

In Arkansas' 69-59 victory over Texas A&M, Chaney had turnovers on three consecutive possessions in the first half and didn't play in the second half.

At LSU Chaney had four fouls in seven minutes -- including a technical when he slapped the ball into the stands. Skylar Mays hit both technical free throws and the Tigers won 79-77.

When the Razorbacks won 76-72 at Ole Miss, Chaney played four minutes in the second half.

Despite Chaney's struggles, Musselman put him into the Vanderbilt game for Adrio Bailey with 15:37 left. Within a minute, Chaney had scored two baskets on a layup and dunk. By halftime, he had eight points.

"In all honesty, Reggie's attitude has really been great," Musselman said. "The thing that has impressed me is that he keeps coming to the gym early and getting reps"

Chaney said it was a confidence boost to get into a game early and contribute.

"In practice I've been going real hard," he said. "[Musselman] still believed in me and played me, so I went in and I had to do what I had to do.

"I came in and gave my best hustle and earned a little bit of his trust back."

"Reggie's just been pushing through every day," Whitt said. "Every day he comes into practice trying to get 1% better. I think [Wednesday] was one of those nights that it showed.

"It's never going to show overnight no matter how bad you want it to, but people behind closed doors don't see how hard [Chaney] comes in and works every day. Having a night like this, for me and for all of us in the locker room, we know that's the capability of what he can do."