Old rivalry about to get new coat of paint 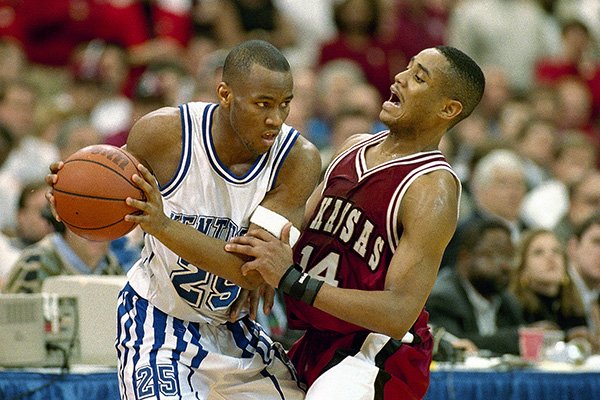 Anthony Epps (25) of Kentucky, left, battles Corey Beck (14) of Arkansas in the first half of the SEC Tournament championship game at the Georgia Dome in Atlanta, March 12, 1995. (AP Photo/Andrew Innerarity)

When you have lost seven consecutive games to a team its hard to believe it was ever a rivalry, but Kentucky-Arkansas used to be to basketball what Alabama-Auburn is in football.

Yet, the old flame of competition is starting to burn deep within the Razorbacks Nation.

Bud Walton Arena is sold out for tomorrow’s game between No. 10 Kentucky and unranked Arkansas.

The Wildcats are 12-4 after suffering a last-second loss at South Carolina on Wednesday night on a Hail Mary shot that banked in, and the Razorbacks are 14-2.

And all the makings are there for an old fashioned showdown at 3 p.m. Saturday.

When Arkansas joined the SEC for the 1991-92 season it wasted no time in letting the Wildcats, historically the basketball bully of the SEC, know a new winner was in town.

Their first conference game was in Rupp Arena and the Hogs won 105-88.

Moments before the game ended Nolan Richardson told his team to get off the court as soon as the game ended. Do not disrepect Rupp Arena with a celebration.

Ironically, in that same arena in 2002, Richardson would make the statement that Arkansas could give him his money and have his job.

The brass felt he had doomed his future recruiting and terminated him. A lawsuit came, but all is forgotten now. The court in Bud Walton is now named after him.

Before his firing there were some classic games.

The Razorbacks won the first two meetings and by the end of his reign Richardson was 7-12- against one of the best programs in basketball history.

The Arkansas-Kentucky games had such a nationwide appeal that in 1995 and 1997 the games were played on national television on the same day as the Super Bowl.

The teams split that series with a win each.

Then came Stan Heath and for all practical purposes the end of a great rivalry.

He was 0-5 against the Wildcats.

Arkansas then turned to one of Kentucky’s favorite sons, one of the unforgottens who stayed through NCAA troubles and helped rebuild the program, John Pelphrey.

Pelphrey’s first game against his alma mater was in Lexington, and the Wildcats sold commemorative coins honoring Pelphrey, the Arkansas basketball coach.

He managed a 77-76 overtime victory against the Wildcats in his final season with the Hogs. He was 1-3.

Pelphrey returned to Florida as an assistant, then Alabama and is in his first season as head coach of Tennessee Tech.

Arkansas then made the move it had been waiting on for years and brought back one they considered their own: Mike Anderson.

Anderson had been Richardson’s top assistant during his 17 years at Arkansas.

Compared to Heath and Pelphrey, Anderson had success against Kentucky going 3-8. Two of those victories were in overtime.

Now the Razorbacks have Eric Musselman, and if nothing else he has put some excitement back on the floor for the fans.

He storms the sidelines coaching and teaching. The man probably burns 10,000 calories each half.

Arkansas has hired a winner. A good guy who really knows basketball.

In four years at Nevada he was 110-34 and made the NCAA Tournament his last three seasons.

With a short bench and very little length he has delivered so far at Arkansas. He’s defined and redefined player roles, and he prepares them for each opponent.

Tomorrow could be a classic. For sure it is a new beginning in an old rivalry.