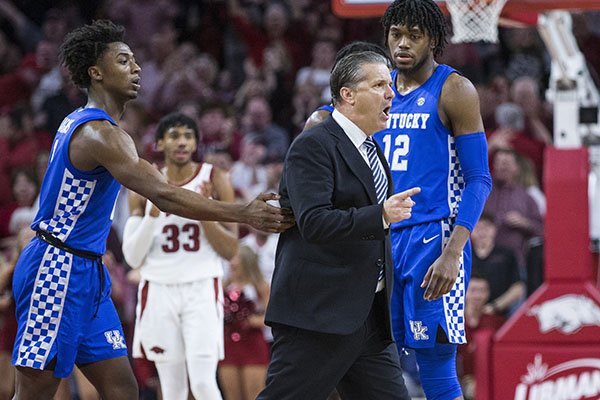 Kentucky coach John Calipari argues with officials during a game against Arkansas on Saturday, Jan. 18, 2020, in Fayetteville. Calipari was ejected.

FAYETTEVILLE — There is little doubt about when Arkansas’ electric crowd of 19,200 was at its loudest Saturday.

It happened when Kentucky coach John Calipari argued with the referees, was assessed two technical fouls and was ejected with 8:19 remaining. He left the crowd roaring so loud that Wildcat guard Immanuel Quickley put fingers in his ears to try and lessen the noise.

“You could tell the whole entire arena wanted us to lose,” Kentucky forward Nick Richards said.

But the ejection seemed to be a turning point in the game as Arkansas, which used three Mason Jones technical free throws to take a 47-44 lead, went nearly four minutes without a score.

Kentucky freshman guard Tyrese Maxey, who had 11 points and 6 rebounds, was impressed with the atmosphere.

“It was definitely pretty loud at times,” Quickley said. “Especially when they went on that little run and when Coach Cal had his three technical fouls….It was super loud then.

“We just got in the huddle, stayed together. Our leaders stepped up, spoke what they had to say. (Kentucky associate head coach Kenny Payne) came in there and just told us what we had to do. And we had to go out there and execute it.”

Richards, whose 17 points to lead five Kentucky players in double figures, said that he enjoyed the raucous arena and even some Arkansas fans shaking the Wildcats bus when it arrived.

“It motivates us,” Richards said. “Cal always talks about, ‘Let’s ruin their weekend.’ We tried to do that, just get a W.”

Kentucky starting guard Ashton Hagans, who had 13 points and 10 rebounds, was also playing with four fouls late in the game.

“That just shows you what kind of team we are,” Richards said. “As I’ve been saying before, this team has a will to win. Nothing was going our way. Our coach got tossed out of the game, our main point guard got thrown out of the game, too, and guys stepped up.

Richards did not think that Calipari’s ejection was a rallying cry for the visitors.

“I don’t think it sparked us,” he said. “I think we just had to do it for him. He’s the guy that’s actually motivating us to win games and play to the best of our ability. I think we had to get this win for him.”

Payne took over for Calipari, although he didn’t think the head coach was looking to get tossed.

“No, it happened so fast we couldn’t really react to it,” Payne said. “Unfortunate, for me especially, sitting there having to coach the game at the end at a critical point where the game is turning in their favor. But these kids are resilient. They deserve all the credit.

“When you come to a school like Kentucky, it’s not talked about a lot, but you have to overcome adversity. We teach it, we talk about it every day. Things aren’t going to go your way in a game, just like life; how are you going to handle it? Who are you? What are you about? You may get a bad whistle, you may not. The team may play hot, they may play out of their minds (but) you’ve got to find a way to get a win.

“We talk about this from the day we recruit them to the day they’re in it. So to see these kids fight through and come out the way they did is really gratifying.”

Payne credited Kentucky assistant coach Tony Barbee for suggesting the Wildcats go to a zone when he felt like his team was in a mountain of trouble.

“I think it was a huge mountain,” Payne said. “First of all, Coach Barbee doing the zone stuff was unbelievable. It gave us the ability to play Ashton Hagans with four fouls. We need him on the floor. But on the other end, we ran a play – it’s Ashton’s play where he gets to make decisions, and like a true point guard he made the right decisions, which allowed the lead to get 15-2 in that spurt.”

Calipari's teams have not played much zone during his time at Kentucky.

“No, I don’t think he’s anti-zone,” Payne said. “Basically, our hands were tied. One of our best players, our leader, Ashton Hagans, has four fouls. Well, how do we keep him in the game? If we stay man, they’re going to drive him and he could get a foul and he’s out. If we go zone, he’s guarding an area, so that’s what we decided to do, which really helped us.”

Richards went more in depth on the zone.

Maxey noted that Kentucky had not practiced much on zone defense.

“I think we practiced it yesterday for a little bit because Cal doesn’t really use zone,” Maxey said. “We just went with it and we trusted what they said to do and went out there and executed.”

Payne was not sure exactly what set Calipari off.

“I wish I knew the answer to that other than emotions run high in these games,”Payne said. “We’re playing at another team’s home court. Things happen, bad calls happen, situations happen that the other team does stuff that - whatever, they play well. So there’s going to be moments of emotions and overreacting and underreacting or whatever you want to call it. Again, I hate to say this like this: I wish he wouldn’t have got tossed.”

Calipari did not meet with media after the game, but was happy about the win, Payne said.

“When we got in, he gave me a hug,” Payne said. “He said, ‘I’m proud of you. I’m proud of these guys. They fought through.’ And I just told him, ‘This is what you’ve built. Overcoming adversity.’ The momentum of that game was headed in their favor.”

Payne also told his team to rebound and run.

“What we talked about was, look, it’s crunch time,” Payne said. “It’s an execution game. So the last thing they’re expecting us to do is rebound and push the ball up the court. Well, that’s what we did. We rebound that ball, we fly it up first, and then if we don’t have anything we’re going to execute. By doing that, we got a couple layups, got a wide-open three and it opened the game up for us to give us a cushion.”

Jones led Arkansas with 19 points before fouling out and Jimmy Whitt added 14, but Kentucky held Isaiah Joe to 13 points while shooting 4-of-14 from the field overall and 3-of-11 from 3-point range.

The Razorbacks, who were out-rebounded 47-29, shot 33 percent overall with Quickley harassing Joe after he hit two early 3-pointers.

Payne praised the job Arkansas coach Eric Musselman has done in his first year with the Razorbacks.

“This is a very good Arkansas team by their record and the way they play,” Payne said. “They create a lot of mismatches, they got a lot of good players, and for us to come in here and come out with a W against a well-coached team whose atmosphere and culture is changing - and Musselman is doing a great job here - says a lot about our team.”