Franks' decision coming in next 2 days 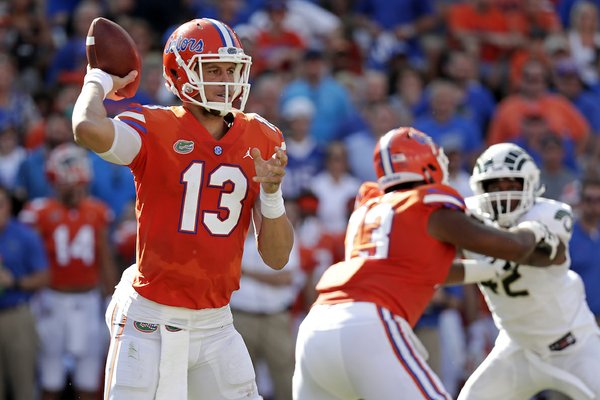 FAYETTEVILLE — If former Florida quarterback Feleipe Franks makes a return trip to Arkansas in a couple of days, it will be because of the impression the people in Fayetteville made on him.

“Just how genuine everybody is,” Franks said in a brief interview before his flight out. “I think that’s something that’s really good and something you don’t get much of nowadays, but that was the best part.”

Franks (6-6, 238 pounds), who would be immediately eligible, is also considering Kansas and will announce his decision soon. In order to attend Arkansas, he will have to enroll in classes by Tuesday.

Franks got the chance to sit down with new Arkansas offensive coordinator Kendal Briles.

“That’s what I came down here for,” Franks said. “Not really flashy, this, that and the other, but just to talk ball, so I liked it.”

He threw for 698 yards, 5 touchdowns and 3 interceptions, and completed 76 percent of his passes before suffering a season-ending dislocated ankle injury in the Gators’ third game of the 2019 season.

“It was good, the weekend overall was good,” Franks said. “It was a good visit.”