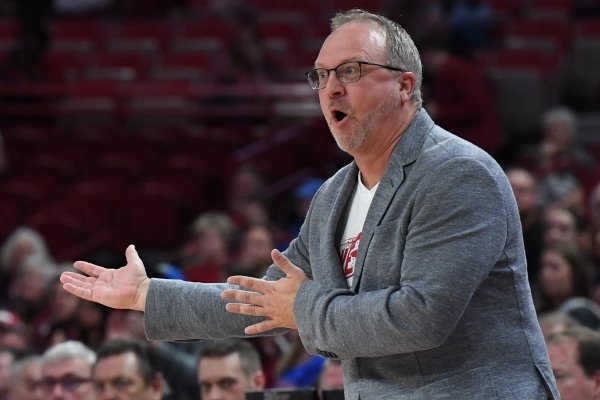 Mike Neighbors was pleased with how the University of Arkansas women's basketball team responded Sunday after its 64-55 loss Thursday to Georgia.

The Razorbacks (16-4, 4-3 SEC) defeated Florida 79-57 on Sunday at Walton Arena in Fayetteville. Makayla Daniels had a game-high 19 points for Arkansas.

Neighbors said he learned a lot after Thursday's loss and hoped his team would bounce back Sunday.

"Every team is going to have a game, or games, like that," Neighbors said Monday after speaking at the Downtown Tip-Off Club's weekly luncheon at the North Little Rock Chamber of Commerce. "We call them Space Jam games. Games where the Monstars come and take over your body and you don't look the same. Georgia may have been that game. But Georgia played really well. It's a tough matchup for us.

"But the way we bounced back really makes us encouraged. This was a Florida team that has played all five of the ranked teams in the league. They chose to guard Chelsea and Amber very closely, and that left some other players open. And as a result, they had their best games of the year.

"But we have two road games coming up at an important time."

Before Sunday's game, Neighbors and the Razorbacks learned of the death of NBA legend Kobe Bryant. Bryant, his 13-year-old daughter Gianna and seven others were killed in a helicopter crash in Calabasas, Calif., about 30 miles from downtown Los Angeles.

The 18-time All-Star spent all 20 of his NBA seasons with the Los Angeles Lakers, winning five NBA championships and earning the 2008 MVP award.

Neighbors and Bryant worked together at a basketball camp in 2018 at Vanguard University in California, which the Razorbacks coach recalled Monday.

During his speech Monday, Neighbors touched on several topics, including his childhood as a Razorback fan in Greenwood. When he was in the third grade in December 1977, he and his classmates had to write a letter to the Razorback football players who were playing in the 1978 Orange Bowl against Oklahoma.

The player Neighbors wrote a good-luck letter to was running back Roland Sales. Sales, who was a backup on the 1977 Razorbacks team, filled in for the suspended Ben Cowins in the Orange Bowl and rushed for 205 yards and 2 touchdowns on 22 carries, and caught 4 passes for 52 yards in Arkansas' 31-6 victory over the Sooners.

"I'm fully convinced I was the reason for his success," Neighbors said to laughs from the crowd.

In Neighbors' third season at Arkansas, the Razorbacks are ranked nationally. They dropped four spots to No. 25 in Monday's Associated Press Top 25 women's basketball poll.

Expectations have changed, for the better, since Neighbors' debut. He is currently 51-37 at Arkansas.

"We've changed expectations. They expect us to win every single game. I'm not telling you we're there yet. But we have been winning more games and have been competitive."