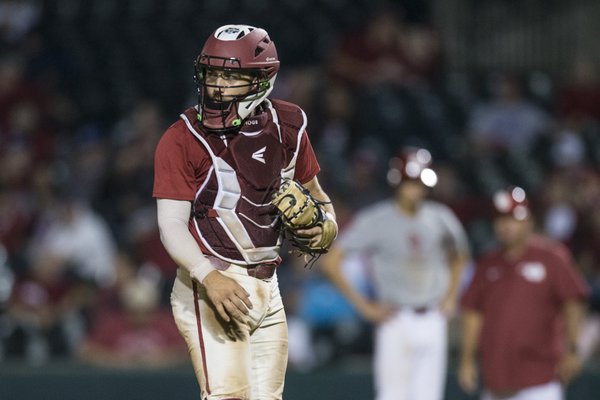 Arkansas catcher Casey Opitz looks to the dugout during the Razorbacks scrimmage against Oklahoma Friday, Sept. 20, 2019, at Baum-Walker Stadium in Fayetteville. Opitz was named a captain for the 2020 season.

FAYETTEVILLE - When you look at catcher Casey Opitz's resume it's impressive.

He is a preseason third-team All-American, according to Baseball America. He's been a part of two teams that have played in the College World Series, and he was drafted in the 27th round by the Cleveland Indians coming out of high school.

But it was his teammates that gave him his biggest accolade yet.

"That was probably one of the biggest achievements I’ve had since I’ve been here," Opitz said. "Just having the respect of my teammates and earning that through my three years here, that was really special to me."

The junior from Centennial, Colorado, was named a team captain, along with pitcher Kevin Kopps.

While this is the first year Opitz is officially a captain, he has experience in the captain role. Arkansas coach Dave Van Horn challenged Opitz to become a leader last season.

"Last year I kind of took on that role," Opitz said. "Just because I’m a catcher and that’s kind of what you need. You need that field general out there. That’s the kind of player I’ve always been. I’m going to lead first and do what other guys need me to do."

The Razorbacks have garnered top 10 preseason rankings from D1Baseball and the USA Today coaches poll. Add those rankings, Opitz's captain status and the fact he will be draft eligible at the end of the season, and there could be a lot of pressure on the catcher. But Opitz isn't letting it bother him.

Opitz didn't mince words when asked what they are trying to do.

"We’re trying to win it," Opitz said. “That’s the main goal this season. We have to accomplish a few goals before then, obviously, and we’re going to take that step by step, but we’re trying to win (the national championship) this year."

Redishirt junior Kopps said there isn't any added pressure being a captain on a team again expected to go to the College World Series.

"I don’t think so. I just keep doing what I do,” he said. “Just leading by example. I think it’s just doing what you’re supposed to do and people look up to you."

After making 30 appearances, all in relief, last year, Kopps was asked if he was aiming to earn a spot in the starting rotation.

"Of course. I don’t know anybody here that doesn’t want to start," Kopps said.

Kopps feels like this is the first time since his Tommy John surgery in 2018 that he's been able to throw a starter’s amount of pitches.

"I don’t remember the last time my arm felt like this," Kopps said. "Before, I’d throw 40 pitches and I was exhausted. Now, I threw like 50 yesterday and I could have gone another 30."

No matter if he starts or comes in as a reliever, Kopps said having fellow captain Opitz behind the plate makes a big difference.

"I don't worry about anybody on base," Kopps said. "I don't even think twice about picking anybody off. I kind of want people to try to steal. It's a free out."

Whether the new captains can lead the Razorbacks to the College World Series and add to their extensive resumes remains to be seen, but regardless of results both of them agree this is the most talented team they’ve been on.

“The other teams, maybe there was a Blaine or an Isaiah or someone like that who was exceptionally talented,” he added. “But I think as a whole (this is) the most talented."