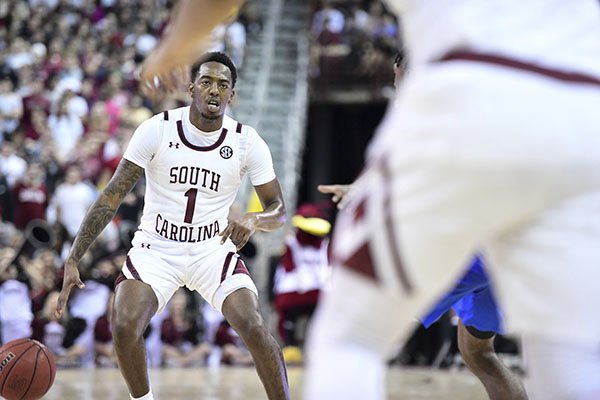 FAYETTEVILLE -- Which SEC men's basketball team has tied defending conference champion and No. 22-ranked LSU for the most road victories by a conference team this season with four?

The University of Arkansas has victories at Georgia Tech and Indiana, but the Razorbacks are 3-3 on the road along with winning at Ole Miss.

South Carolina is the surprising answer for the SEC's top road winner along with LSU. The Gamecocks are 4-2 on the road and the Tigers are 4-1.

"We won at Clemson, who for whatever reason, nobody ever wants to give us credit for that win," Martin said. "But we beat Clemson at Clemson."

The Gamecocks should get credit for winning at Clemson considering the Tigers won at North Carolina for the first time in 60 games and then beat No. 9 Duke.

Against Virginia, the defending national champions who lead the nation in field goal defense at 35.6% entering Tuesday, South Carolina shot 55.1% (27 of 49).

South Carolina also has handed Kentucky its only SEC loss, 81-78 at Colonial Life Arena on Jan. 15 when Gamecocks freshman guard Jermaine Couisnard banked in a three-point shot at the buzzer.

In Kentucky's next game, the Wildcats came into Walton Arena and handed Arkansas its only home loss, 73-66.

South Carolina played Tennessee tough on the road before losing 56-55 at Thompson-Boling Arena. The Gamecocks' only lopsided road game was an 80-67 loss at Auburn last week.

"The game was impacted by the energy in the building at Auburn," Martin said.

Along with the Gamecocks' success on the road, they had some surprising losses at home, including 78-70 to Boston University and 63-56 to Stetson.

"We've got to expect to get South Carolina's best game," Razorbacks Coach Eric Musselman said. "Obviously, their nonconference schedule is what it is, but like last year in conference play, they're playing really well."

"We expect to see a really good team," Musselman said. "They've gotten themselves really ready to play against the Virginias and Kentuckys. The Kentucky game was back and forth, they got stops when they needed and they scored when they needed.

"Any time you play a program that has beaten Kentucky or Virginia, you better bring your 'A' game, or else. So, that's how we approach South Carolina."

South Carolina lost to Stetson in its next game after winning Virginia.

"Stetson, we were just bad," Martin said. "We weren't ready to play."

"They deserved to win the game," Kentucky Coach John Calipari said. "It would have been a shame if we'd somehow thrown one in and won the game.

South Carolina is committing an average of 22.5 fouls per game to rank 348th nationally out of 350 teams. Opponents have attempted 507 free throws compared to 379 by the Gamecocks.

"There's going to be a lot of whistles," Musselman said on his radio show. "Hopefully, we can spend some time at the free-throw line."

The Razorbacks hit 18 of 25 free throws in a 78-67 victory over TCU on Saturday when they played without Isaiah Joe, a sophomore guard averaging 16.8 points per game who was out to rest a sore knee. Without Joe -- who has hit 67 three-pointers -- the Razorbacks relied more on drives to the basket, and TCU was called for 23 fouls.

If Joe plays tonight, the Razorbacks still will look to drive and draw fouls on the Gamecocks.

"I think we've really improved at drawing free throws attempted," Musselman said. "I said it after the TCU game that it was by far -- by far -- our best shot selection of the year.

"We didn't settle for threes. We only took nine threes and we made six. Just really good shot selection, and we've done a really great job of not only getting to the rim lately, but of finishing. We certainly don't want to settle [tonight], either."

"17,000 people are waiting for you when you walk on to the court to shoot warm-up shots," Martin said. "They're just sitting there. Your guys walk out to shoot some balls and the arena's going nuts already.

CHALK TALK Arkansas sophomore guard Isaiah Joe, averaging 16.8 points per game, is questionable to play tonight after he missed Saturday's game against TCU because of knee inflammation. Coach Eric Musselman described Joe as being "day to day." If Joe plays, he'll likely be back in the starting lineup. ... The Razorbacks are averaging 8.5 turnovers in six SEC games and have a turnover ratio of plus-6.0 in those games. ... Arkansas is 11-1 in Walton Arena this season with the lone loss to Kentucky. ... South Carolina beat Kentucky at home. ... The Gamecocks are 4-2 on the road, including victories at Virginia, Clemson, Texas A&M and Massachusetts. Their road losses are at Tennessee and Auburn. ... South Carolina hit 10 of 15 three-pointers in a 77-65 victory over Arkansas last season -- including 4 of 5 by sophomore guard AJ Lawson -- but this season the Razorbacks lead the nation in three-point defense at 24.3% (81 of 333).