Best Hogs in pro baseball No. 7: Hinske a good luck charm for clubs 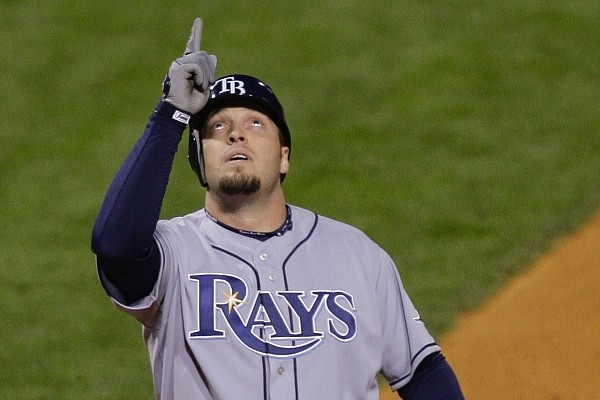 Tampa Bay Rays' Eric Hinske points up to the sky as he crosses home after hitting a home run during the fifth inning of Game 4 of the baseball World Series against the Philadelphia Phillies in Philadelphia, Sunday, Oct. 26, 2008. (AP Photo/Julie Jacobson)

FAYETTEVILLE — Mark Hinske considers his son to be a good luck charm of sorts.

A few franchises around Major League Baseball likely agree with that statement.

Eric Hinske has sat on top of the baseball world more than most. As a player and coach, the Menasha, Wis., native has been a part of four trips to the World Series with four different teams — the Boston Red Sox, Tampa Bay Rays, New York Yankees and Chicago Cubs.

And the 42-year-old Hinske has three championship rings to show for it.

Eric Hinske, who played three seasons at Arkansas under former coach Norm DeBriyn from 1996-98, is No. 7 on the Arkansas Democrat-Gazette’s list of best Razorbacks who played in Major League Baseball.

Hinske knew he wanted to become a professional baseball player at an early age. Those big-league aspirations were written out in a Mother’s Day card when he was in the third grade.

Growing up, his greatest baseball influences were his father and grandfather, who initially taught him to take at least one pitch each at-bat and hit the ball the other way. He did not know how to pull the ball until he matured.

Hinske credits his brother, who is two years older, and his friends for toughening him up as a kid.

Out of high school, Hinske originally had plans of playing football and baseball at the University of Wisconsin-Oshkosh, a 15-mile drive south of Menasha along Lake Winnebago. His brother was a student at the school, and it is where his father attended college.

He held no major Division I scholarship offers at the time, so being a multi-sport athlete near his hometown was looking more and more likely. Then Arkansas entered the picture.

“They sent Doug Clark, (Arkansas’) hitting coach at the time, and I met him and I had like 10 hits in two games,” Hinske said in an interview with Greg Hofer Media in 2016. “Then they sent me down on a recruiting trip, I got off the plane and did a little roundabout view of the campus, and they had some of the Diamond Doll girls take me around. I was like, ‘Wow. This place is pretty cool. I’m in.’

“I got off the plane, signed up and they gave me a full scholarship — 82% or whatever they could give back then — and the rest is history. My three years there were great.”

DeBriyn, a Wisconsin native who played football at UW-Oshkosh, received a tip about Hinske from a former college teammate. He told DeBriyn that the University of Wisconsin missed on the prospect as a football player, but he showed potential in baseball as well.

Clark raved about Hinske after his visit to Wisconsin.

“I’ll never forget it. He said, ‘Norm, I really like this guy,’” the coach recalled. “‘Innately, he knows the strike zone. He doesn’t swing at bad pitches. He’s strong, he’s got energy and I love his makeup.’ That kind of intrigued me.

“I remember him pinch hitting as a true freshman late in the game – he’s a left-handed hitter – and he hit a ball out of the yard in a big ballpark, like 385 to the power alleys. I think he ran around the bases about as fast as you could ever imagine. I think he was in the lineup after that. He just ended up really being a good player.”

He went on to hit .348 in his time with the Razorbacks and still ranks in the top 10 in school history in seven batting categories, including RBI, runs scored and extra-base hits. He set a school record with 87 runs scored in 1997.

When the 1998 MLB Draft rolled around, he envisioned being selected in rounds 6-8, but things did not go as planned. His name was called by the Chicago Cubs in the 17th round. Unhappy with his drop in the draft, his first thought was to return to Arkansas.

Then his grandfather stepped in.

“He said, ‘I played for free,’” Hinske said. “‘You’re being irrational. Go sign, go play. You get a year older, they’ll forget about you.’ I listened to his advice. Then I was off to Williamsport, Pa., to play short-season A ball.”

After totaling 75 home runs and 249 RBI in the minor leagues over the next four years, he made his debut for the Toronto Blue Jays in 2002 at age 24. That season turned out to be one of the highlights of his 12-year career.

He hit .279 over 151 games and finished with 24 home runs and 84 RBI to earn the American League Rookie of the Year award.

“Right after my grandfather passed away in 2001, I got traded like a week later,” Hinske said. “I thought he was pulling some strings up there to get me to the big leagues. He passed away, then I got traded to Toronto.

“Then the GM called and said, ‘You’re going to be our everyday third baseman.’ That was awesome.”

His rookie numbers wound up being career highs. He only hit 20 home runs in a season one other time, in 2008 with Tampa Bay. He also drove in 69 runs with the Blue Jays in 2004.

Hinske won a World Series title as a player with the Red Sox in 2007 and Yankees in 2009, and experienced the Cubs’ long title drought come to an end as a coach in 2016. From 2007-09, he appeared in three consecutive World Series.

In 2008, he hit a home run in Game 4 of the Fall Classic off Philadelphia Phillies pitcher Joe Blanton after not being active for the American League Championship Series. More than a decade later, Eric Hinske was shipped his home run ball, he said in a June interview with the Diamondbacks’ BP Show on Arizona Sports 98.7 FM.

“I’m just floating around the bases, like, ‘What just happened? Wow.’ Then, all of a sudden I had to go pinch hit again, and I strike out to make the last out of that World Series,” he laughed. “All of those experiences, I would never give away. They’re all part of the journey.

“Just to even be in that situation, you’ve got to feel lucky about it. I prepared every day the same way to try to be successful. All the failures and successes, I’ve got no regrets.”

Now as a coach, Hinske’s mission is to impart wisdom gained over a long career to up-and-coming players with Arizona.

“I went through a lot up here, and I can definitely help these younger guys.”