Best Hogs in pro baseball No. 2: Dallas Keuchel took off after getting MLB shot 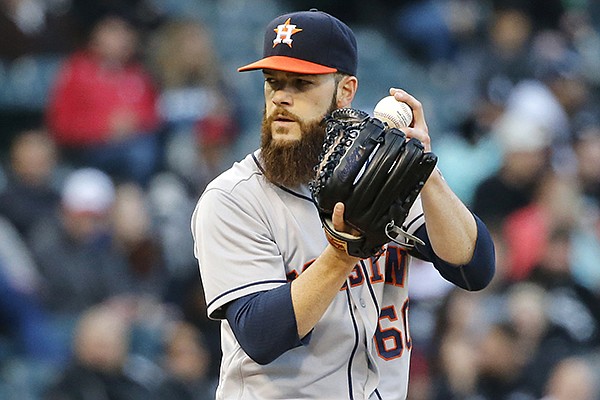 FAYETTEVILLE — A personal change in mechanics and an organizational change in philosophy early in Dallas Keuchel’s career were key in his ascent to staff ace for the Houston Astros.

Between the end of his 2012 rookie season and spring training in 2013, the left-handed Keuchel developed a slider while home in Tulsa, according to Ben Reiter’s book “Astroball: The New Way to Win It All.” The third pitch complemented his sinking fastball and changeup, and made him a more versatile starter.

His change coincided with Houston’s change in ownership and management, and the team’s switch to the American League. Prior to the 2013 season, new Astros General Manager Jeff Luhnow told players that the team would focus more on analytics, including dramatic defensive shifts based on batters’ tendencies.

After some initial resistance to the idea, Keuchel devoted himself to studying the analytics and found that on the whole they helped him, according to Reiter’s book. Despite his limitation with a fastball that sat in the high 80s and topped out in the low 90s, his ERA improved slightly over the year before and he struck out a higher percentage of batters.

“He spent hours each day poring over video and scouting reports, to the point where he could himself position his infielders more precisely than even his managers or coaches could,” Reiter wrote. “If he planned to throw an inside slider to a left-handed batter, his ability to hit his target allowed him to predict exactly where he was going to deliver it, and he now knew exactly where the batter would probably hit it. Before the pitch, he could direct his second baseman to move two additional feet to his left.”

By 2015, Keuchel was the best pitcher in the AL — the winner of the Cy Young Award that year when he started the All-Star Game and won the second of four Gold Glove Awards. He is now one of the highest-paid players in the game in the first year of a three-year, $55.5 million contract with the Chicago White Sox.

Keuchel is No. 2 on the Arkansas Democrat-Gazette’s list of the best former Razorbacks to play Major League Baseball. A two-time all-star, he has 84 career victories and a 3.67 career ERA. His career wins above replacement is 20.0, meaning his value was worth 20 more wins than a readily available replacement player.

Such a decorated career would have been difficult to predict in college when Keuchel didn’t become a full-time weekend starter until his junior season in 2009. He was efficient, but not exactly dominant for the Razorbacks, posting a 9-3 record and 3.92 ERA as a junior.

In his final collegiate outing he came out of the bullpen to shut down Virginia for four innings on three days rest during a thrilling elimination game at the College World Series in which Arkansas won 4-3 in 12 innings.

On the mound that night for the Razorbacks were Keuchel, Drew Smyly (Little Rock Central) and Mike Bolsinger, all who have pitched in the majors. Catching them was James McCann, who will reunite with Keuchel this year as starting catcher for the White Sox. The team also included Brett Eibner and Andy Wilkins, who had brief MLB careers, and Zack Cox, a first-round draft pick the following year.

“That was by far the most talented team I’ve ever played on,” Keuchel said in 2014.

Keuchel’s lack of velocity — Reiter described him as a “junkballer,” having struck out 69 in 108 innings as a junior — kept teams away in the 2009 draft. He was selected 221st overall by the Astros in the seventh round.

What scouts seemed to underestimate was Keuchel’s ability to place the ball wherever he wanted, a trait that would become important as he studied where and how hitters were vulnerable.

“They wanted to see more velocity, and I get it,” Arkansas Coach Dave Van Horn said. “Teams in the big leagues are looking for that. But he always had great feel on the mound, what we call pitch-ability. He could move the ball around. He could throw 92, 93 [mph], he just couldn’t do it all day.

“He’s one of the best pitchers we ever had. He was good as a freshman, he was better as a sophomore and by his junior year he was really good.”

Keuchel spent three years in the minor leagues before getting called up to the Astros for the first time in June 2012.

“At the time he came up I think there was some curiosity because he had pitched well in Triple-A and because the team in Houston was so bad. It was a 107-loss season,” said Brett Dolan, who was the Astros’ radio play-by-play announcer from 2006-12. “There were a couple of times that I think we thought, ‘Well, if he isn’t going to get a shot for this team, maybe he’s not going to get a shot.’”

He allowed a single run in his first three starts, and earned his first career victory with a complete game against the Cleveland Indians. The Astros won 8-1.

“He had 15 ground-ball outs,” Dolan said. “It was vintage Keuchel: Soft contact, ground-ball outs. At the time I think we thought he’s going to have a shot this year, maybe next year to see if he can become established. The Astros had such a void in pitching. That complete game opened some eyes that there’s some potential there.”

Keuchel pitched in 31 games in 2013 but was also sent back to Houston’s Class AAA affiliate in Oklahoma City for a short time during a season in which the Astros lost a league-high 111 games. He was called back up before the All-Star break and pitched well enough to make the opening-day roster in 2014.

“Had the Astros been in a situation from a pitching standpoint in 2012 like they were when I got there in 2006, when there was Roy Oswalt, Andy Petitte and Roger Clemens, it would have been almost impossible to break through,” Dolan said. “And yet he had a hard time in 2012 for a team that lost well over 100 games.

“I would talk to our player personnel people and sometimes people in the baseball office and ask, ‘What about Keuchel?’ It was truly the land of opportunity. At least the thought I got back was they weren’t sure if he was a big-league pitcher or whether he might be able to contribute to the ball club.

“To Dallas’ credit, he was able to not just get an opportunity, but make the most of it. He went through what wasn’t an easy first year in 2012 to get to the point where he could become an every-day pitcher, let alone a Cy Young winner or a No. 1 starter for a very good team.”

According to Reiter’s book, the Astros tried to trade Keuchel to the Miami Marlins during the 2013 season.

“[Keuchel] heard that the only reason he wasn’t headed to Miami was that the Marlins preferred [Jarred] Cosart, another holdover from the previous regime, but one who was two and a half years younger than he was and threw a fastball that touched 99,” Reiter wrote.

In 2014, Keuchel pitched a career-best five complete games and lowered his ERA to 2.93 in 200 innings. He told WholeHogSports.com that year he had gotten over the anxiety of whether he was going to stick around Houston.

“Not knowing where you’re going to be in a couple of weeks is very stressful on your professional life,” Keuchel said. “I’ve pushed that aside and said I was going to do my best to perform each day and whatever happens, happens.”

The Cy Young Award he won that season was the second ever by a former Arkansas pitcher. Cliff Lee (Benton) won the first in 2008 with the Cleveland Indians.

Keuchel had his second All-Star campaign in 2017 when he went 14-5. He was the Astros’ No. 1 starter and was paired with a future Hall of Fame sidekick when Houston traded for Justin Verlander at the trade deadline in July.

Keuchel and Verlander provided a strong 1-2 rotation for the Astros, who beat the New York Yankees in seven games in the AL Championship Series, then beat the Los Angeles Dodgers in seven more games in the World Series. Keuchel started Games 1 and 5 of both series, as well as Game 1 of the divisional series against the Boston Red Sox. He went 2-2 with a no-decision that postseason.

Earlier this year when news broke that the Astros used cameras to steal signs during their World Series year, Keuchel was the first player from that team to apologize.

“It’s just what the state of baseball was at that point in time,” he said in January. “Was it against the rules? Yes, it was. And I personally am sorry for what’s come about the whole situation.”

Keuchel left Houston as a free agent following the 2018 season when the Astros lost to the Red Sox in the ALCS. The Astros offered him a one-year contract worth $17.9 million, according to reports, but he turned it down.

After he and his agent Scott Boras played hardball with several teams, Keuchel settled on a one-year deal with a prorated salary of around $13 million with the Atlanta Braves in June. He had a 3.75 ERA with the Braves and made the playoffs for the fourth time in five seasons. He took no-decisions in Games 1 and 4 of the Braves’ divisional series loss to the St. Louis Cardinals.

In Chicago, Keuchel is competing to be the opening-day starter when the White Sox host the Minnesota Twins on July 24. He’ll vie for the top spot with hard-throwing right hander Lucas Giolito.

“It’s been amazing and gratifying to watch him grow up,” Van Horn said. “I don’t know if a lot of people when he left here thought he would make it to the big leagues because he didn’t throw hard enough. He’s a left hander in the category of a Greg Maddux-type pitcher and he fields his position like a shortstop.

“Any time you get to watch your guys leave and 10 years later they’re still playing, that’s something special.”