Best Hogs in pro baseball: The ones who got away 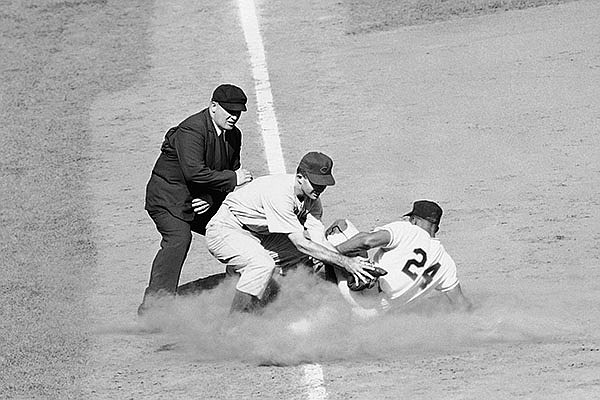 FAYETTEVILLE — There is some disagreement about whether Randy “Ransom” Jackson ever played baseball at the University of Arkansas.

The Razorbacks’ baseball media guide lists Jackson as a former player, but in his autobiography “Handsome Ransom Jackson: Accidental Big Leaguer,” Jackson suggests he never played organized baseball until he transferred from Arkansas to TCU following his freshman year in 1943-44.

“The only baseball I played growing up consisted of pickup games at a junior high school near my house in Little Rock,” Jackson wrote of when he began playing for the Horned Frogs. “If four guys showed up, we played with four. If there were twenty-five, we made up a game for that number. Everything was seat of the pants.”

Had it been proven that Jackson, who was a two-time All-Star third baseman for the Chicago Cubs in the 1950s, played baseball at Arkansas, he likely would have made the Arkansas Democrat-Gazette’s list of the best Razorbacks in professional baseball.

However, it appears Jackson, who died last year, was one of an impressive list of players who were affiliated with the UA, but never played for the Razorbacks.

Jackson transferred to TCU to be part of a Navy pilot program during World War II. When TCU’s football coach, Dutch Meyer, saw the 6-0, 165-pounder, he asked Jackson to play for the Horned Frogs, who were short on players because of the war. Meyer also coached TCU’s baseball team and encouraged Jackson to play that sport in the spring of his sophomore year. His father had played third base at Princeton, so Jackson decided that would be the position he played, too.

Jackson was a natural in both sports. As a halfback, defender and kicker, he averaged about 50 minutes per game, according to his autobiography, and helped TCU to the 1944 Southwest Conference football championship. With a .500 batting average the following spring, he won the first of his three consecutive SWC batting titles.

The U.S. Navy transferred its pilot program — and Jackson — to the University of Texas in the fall of 1945. He played baseball for the Longhorns for two more years, batting .400 and .439. While playing as a running back behind quarterback Bobby Layne, on New Year’s Day 1946, Jackson became the first player to ever play in consecutive Cotton Bowls with two different teams.

“I went to the University of Texas to be a navy officer and wound up in a sports hall of fame,” Jackson wrote of being inducted into The Longhorn Hall of Honor. “Talk about an accident.”

Jackson holds some distinctions in professional baseball. In 1955 he was the first major league player credited with an intentional walk. It was the first year those were counted.

While Jackson’s accomplishments are largely forgotten, Torii Hunter’s are fresh.

A native of Pine Bluff, Hunter committed to then-Arkansas Coach Norm DeBriyn in 1993 and some thought he might also play football for the Razorbacks.

The Minnesota Twins ended any thought of that when they drafted Hunter 20th overall in the MLB Draft. He made his debut with the Twins in August 1997, the beginning of a 19-year stay in the major leagues that also included time with the Los Angeles Angels and Detroit Tigers.

Hunter was a five-time All-Star, won nine consecutive American League Gold Gloves in center field between 2001-09, and was twice a Silver Slugger.

“I was so happy that he signed with us because everybody from Southern Cal to LSU camped out,” DeBriyn said. “He was such a prospect.”

Although he never played for Arkansas, Hunter has remained active in the Razorbacks’ program. In 2014 he donated $100,000 toward the construction of the Fowler Family Baseball & Track Training Center, and he has attended Razorbacks home games in multiple sports through the years.

After meeting Hunter for the first time during an event in Springdale several years ago, Arkansas Coach Dave Van Horn had a Razorback jersey made with Hunter’s name on the back.

“When he opened it and saw it, he went crazy,” Van Horn said. “He just loved it. That fired me up that he liked it that much.

“He’s been good to us and good to his hometown of Pine Bluff.” 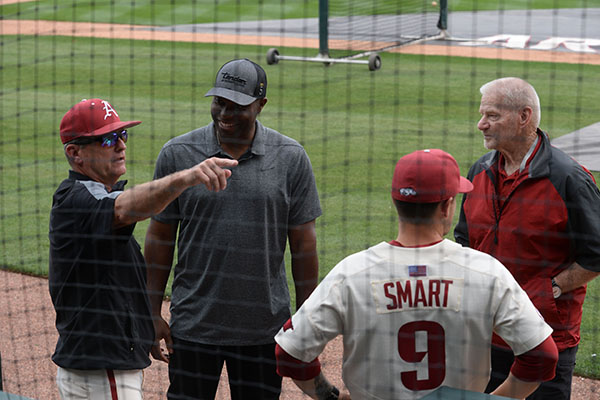 DeBriyn said Hunter stands out as one of the best he ever signed, but there were others who skipped playing for him and made the big leagues.

Outfielder/first baseman Dave Collins committed to DeBriyn in the 1970s and played 16 major league seasons, mostly as a member of the Big Red Machine in Cincinnati.

Pat Mahomes pitched 11 major league seasons and committed to Arkansas at the height of DeBriyn’s success in the late 1980s. Mahomes opted to go pro when the Twins drafted him in the sixth round in 1988. His son is Patrick Mahomes, the Kansas City Chiefs quarterback who was last season’s NFL Most Valuable Player.

Vance Wilson committed to Arkansas out of Mesa (Ariz.) Community College before turning pro. After an eight-year major-league career, Wilson was manager of the Class AA Northwest Arkansas Naturals in Springdale and has spent the past three years as a coach for the Kansas City Royals.

Dustin Moseley, a right-handed pitcher from Texarkana, spent seven seasons in the major leagues after turning down a chance to play for the Razorbacks.

Like DeBriyn, Van Horn has seen his fair share of great players go pro instead of coming to Fayetteville.

Chris Davis signed with the Razorbacks out of Navarro (Texas) Junior College in 2006, but was drafted by the Texas Rangers in the fifth round. Davis, nicknamed “Crush,” found his greatest success as a member of the Baltimore Orioles, where he twice led baseball in home runs and in 2013 was an all-star, the American League RBI leader and won a Silver Slugger Award.

“He just absolutely crushed the ball his last year in junior college, and we didn’t feel like we were going to get him,” Van Horn said. “He had some of the best power of any kid I’ve ever seen. I saw him hit a ball at a JUCO ballpark that went to the lights. He would have hit some home runs here and that would have been fun to watch, but that’s just the way it goes.”

Other notable players to sign with Arkansas but go pro during the Van Horn era include Travis Wood, Brandon Nimmo, Greg Bird, Robbie Ray and Michael Fulmer, who all have spent time in the major leagues. Wood, a right-handed pitcher from Bryant, was a 2013 All-Star and member of the Cubs’ 2016 World Series team. The right-handed Fulmer was the 2016 AL Rookie of the Year while pitching for the Tigers.

Those who never played for Arkansas were not considered for the all-time list, but there were several former Razorbacks who received nominations from the Democrat-Gazette’s panel of sportswriters and long-time baseball observers. Among them:

• Logan Forsythe: A first-round pick in 2008, who is entering his 10th year in MLB while playing for his sixth team, the Philadelphia Phillies. In 2017, Forsythe started for the Dodgers in the World Series.

• Craig Gentry: The Rangers’ rookie of the year during their AL championship season in 2011, Gentry played nine major-league seasons as an outfielder and was known best for his base running.

• Tim Lollar: In 1982, Lollar won 16 games and two years later he started a game in the World Series for the San Diego Padres.

• Blake Parker: A college catcher, Parker converted to a minor-league pitcher in 2007 and, as a member of the Phillies, is entering his eighth major-league season.

• Drew Smyly: Enjoyed success with the Tigers and Tampa Bay Rays early in his career. Now a member of the San Francisco Giants, Smyly has a career record of 35-34.

Current big leaguers who might get consideration in future years include pitchers Ryne Stanek of the Miami Marlins and Jalen Beeks of the Rays. Outfielder Heston Kjerstad also stands a good chance to get a shot at the majors after he was selected second overall by the Orioles in this year’s draft.

And it will be worth watching the career progression of pitching coach Wes Johnson, who the Twins hired away from Arkansas in an unprecedented move two years ago. In Johnson’s first year the Twins improved their team ERA from 22nd to 13th and made the playoffs.