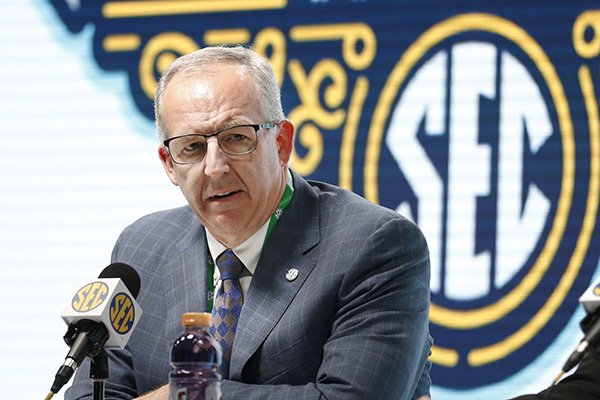 FAYETTEVILLE -- Today, the SEC was supposed to convene in Atlanta to celebrate the beginning of a new football season.

But SEC media days will not be held at the College Football Hall of Fame as originally scheduled.

Instead, SEC officials are scheduled to be at the conference office in Birmingham, Ala., today hosting in-person meetings between SEC Commissioner Greg Sankey and the league's athletic directors.

The SEC brass and athletic directors will convene against an ominous backdrop of covid-19 spikes throughout most of the conference's 11-state footprint.

Arkansas Athletic Director Hunter Yurachek will represent a state that surpassed 1,000 new cases in one day on Saturday for the first time since the outbreak began. That is not the direction the SEC wanted to be headed with eight weeks remaining until the scheduled start of the college football season.

In a coronavirus-free world, the SEC would have kicked media days today for a conference that has claimed 10 of the past 14 national championships.

Defending College Football Playoff champion LSU pocketed its third national title in the past 17 years in January with a 42-25 victory over Clemson. Alabama has won five of the past 11 championships, while Auburn claimed one (2010) and Florida two (2006, 2008) in the SEC's dominant run.

During the SEC's 14-year blitz, Clemson has earned two national championships, while Florida State and Ohio State have taken one each as the only schools to break up the SEC monopoly.

Sankey likely would have rattled off some of those factoids in his annual State of the SEC address, which would have led off media days, with 1,000-plus media members contributing to the atmosphere.

Now he'll conduct a meeting in which scenarios for salvaging all or parts of a fall season in football, soccer, volleyball and cross country will be discussed.

The SEC is on the clock along with the Atlantic Coast Conference and the Big 12. The Big Ten announced Thursday a conference-only schedule, followed by a similar announcement from the Pac-12 on Friday.

Sankey admitted on ESPN Radio on Saturday that his concern for a college football season was "high to very high" based on the latest virus numbers.

Speaking on the "Marty & McGee" show, Sankey said, "We put a medical advisory group together in early April with the question, 'What do we have to do to get back to activity?', and they've been a big part of the conversation.

"But the direct reality is not good and the notion that we've politicized medical guidance of distancing, and breathing masks, and hand sanitization, ventilation of being outside, being careful where you are in buildings. There's some very clear advice about -- you can't mitigate and eliminate every risk, but how do you minimize the risk? We are running out of time to correct and get things right, and as a society we owe it to each other to be as healthy as we can be."

Sankey also said on the radio show that the decisions by the Big Ten and Pac-12 do not put added pressure on the SEC, which hopes to make its final decision later this month.

In June, SEC officials made the decision to hold their annual media days in a virtual format due to concerns over the pandemic. However, the start to the delayed media days has not been announced, and SEC coaches are working with a calendar they've never experienced.

If the current schedule holds, teams can begin conducting walk-though practices with footballs and in-person meetings starting July 24. For two weeks, teams can spend up to 20 hours per week on weight training and conditioning, plus non-padded practices and meetings.