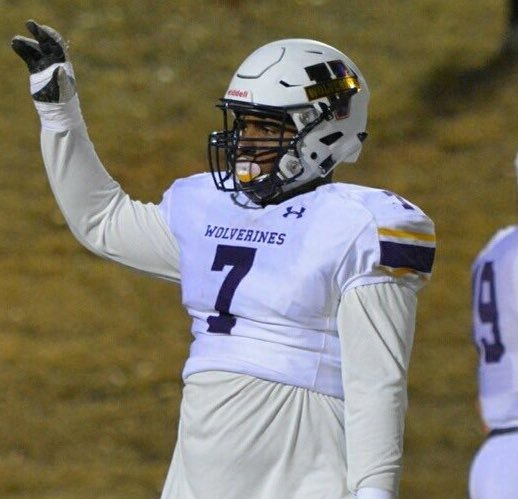 Solomon Wright, a defensive lineman from Vian, Okla., flipped his oral commitment from Texas Tech to Arkansas on Friday.

Wright, 6-1, 280 pounds, pledged to the Red Raiders on May 1. He also had offers from Missouri, Kansas, Oklahoma State, Iowa State, Memphis and others.

“I’m a momma's boy so I have to stay close to home,” said Wright, who has a 355-pound bench press and squats 600. “They offered me a couple weeks ago and I really thought about and prayed about it and I feel like it’s going to be home for me, and the coaches are real. I saw that when they were talking to me and we had some Zoom meetings and it went really good and I talked to my family about it and they were all for it.”

His father Kenyatta Wright, a Fort Smith native, played linebacker for Oklahoma State, the New York Jets and Buffalo Bills. The Wrights have family members in Vian and Arkansas who root for the Razorbacks. They also know former Arkansas safety Kamren Curl and his family.

“They were very excited,” Wright said of his family members. “They can come watch me when I get up there. They were all happy about it.”

Wright recorded 91 tackles, 11 sacks and 31 tackles for loss as a sophomore.

ESPN rates him a 3-star prospect, the No. 56 defensive tackle in the nation and the No. 17 recruit in Oklahoma. His explosiveness and ability to shed blockers is similar to former Razorback and NFL defensive tackle Darius Philon.

He and his family visited Fayetteville and former Arkansas coach Chad Morris in February 2019.

“He recruited my family, not just me,” Wright said of Pittman.

Wright is the 14th Arkansas commitment for the 2021 class.