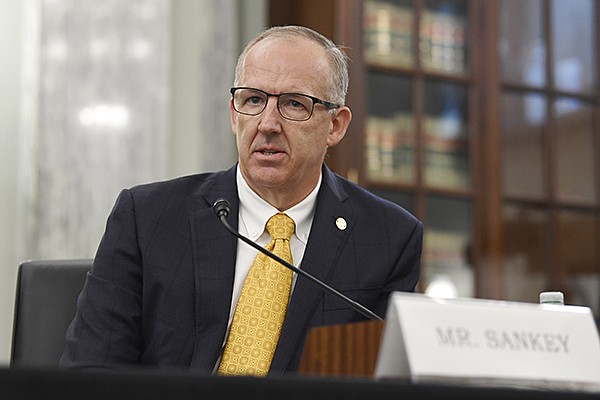 FAYETTEVILLE -- The prospects for a college football season are sure to receive an intensive examination on "Real Sports with Bryant Gumbel", the HBO series that will debut its July episode tonight.

On the segment titled "Return to Play," correspondent David Scott, according to an HBO news release, "examines the short and long-term health risks facing student-athletes -- and the NCAA's decision to not require universities provide any protections for the players."

Scott interviews SEC Commissioner Greg Sankey for the piece to discuss the coronavirus pandemic, and a clip from that interview circulated on social media Monday.

In it, Scott poses this question to Sankey: "To the extent that you have already flown, I gather, hundreds of athletes back to your campuses for training, haven't you already put them at an increased risk for infection?"

"Again, you're asking a question in comparison. So in comparison to what? To having them work out at home gyms that may have been their own hot spots without oversight of sports medicine specialists and without strength and conditioning coaches. That reality informed what I still believe was the right decision."

Scott asks Sankey how many of the SEC's 14 universities have reported positive covid-19 test results, to which Sankey suggests the answer is better left to the universities. Scott then presses Sankey that surely he knows that number, saying "That seems like a fair question."

No doubt the appearance by Sankey, who Scott says is often described as the most powerful man in college sports, will fire up more conversations on the efficacy of playing sports this fall.

The timing of the episode comes when many smaller conferences already have postponed or canceled fall seasons. The Big Ten and the Pac-12, two of the Power 5 conferences, have announced conference-only seasons this fall, and that's if -- as Big Ten Commissioner Kevin Warren put it -- there are sports this fall.

The SEC, Atlantic Coast Conference and Big 12 are hoping to hold out until late this month to make a definitive decision of starting on time, delaying, playing a conference-only season or making some other adjustments to their fall schedules.

The University of Arkansas released a glimpse of its covid-19 testing numbers Thursday. Athletic Director Hunter Yurachek said less than 10 athletes and two staff members had tested positive for the virus; that only one case was active; and up to 20 players were in some stage of quarantine, but none of them had tested positive.

The Razorbacks are scheduled to host Nevada on Sept. 5 in their season opener.

Arkansas' next opponent, Notre Dame, released some testing numbers Monday. The athletic department announced 103 football players had been tested July 15, and none of them were positive. However, one football player had shown mild symptoms between July 1 and 15 and had tested positive. The unnamed player is the second known Fighting Irish football player to test positive.

Yurachek, speaking on a Zoom chat with reporters Thursday, encouraged everyone to do their part with mask wearing, social distancing and sanitizing to improve the chances of having sports in the fall.

"This is a virus, and there's been peaks and valleys of this thing since it started," he said. "And we've learned a great deal. I think as we look back at March, when this all started, we made a quick and hasty decision in my opinion as a nation to cancel at least spring sports.

"I think as we look back now, there probably was a way for us to get in and modify baseball and softball and tennis and golf seasons with the social distancing that naturally exists in some of those sports. So I think it's just this is something we've just got to be patient with."