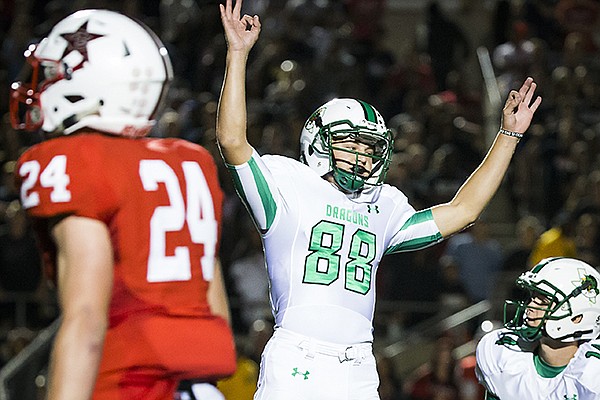 Don't get any ideas about playing football.

The interaction was in jest, but Arkansas’ kicking woes were real. Van Horn's comment to Ramage came after the Razorbacks lost 28-7 to TCU when kicker Cole Hedlund missed two short field goal attempts, including one from 20 yards that would have pulled Arkansas within four points early in the fourth quarter.

“He walked up to me and said, ‘You’re going to stay right here and pitch for us,’” Ramage recalled Van Horn as saying.

Ramage had been a kicker in high school at Southlake Carroll, near Dallas. During two years as the Dragons’ kicker, Ramage made 99 of 100 extra-point attempts and all 12 field goals he attempted.

They weren’t just chip shots, either. During the first game of his senior season, Ramage made a 55-yard kick against Oklahoma powerhouse Tulsa Union.

“I think we had a third-and-long right around the 40-yard line and didn’t convert it," Ramage said. "We were in that weird in-between where: Do we go for it? Do we punt? Do we even attempt a field goal?”

During pregame warmups, Ramage made some kicks from long distance in the same direction. Before kickoff he told his head coach, Hal Wasson, that he felt good about a long attempt if one was needed during the game.

When it came time to make a decision on fourth down, Wasson asked Ramage: “Can you make this?”

This is the fourth in a multi-part series detailing the other sports Arkansas athletes could have played collegiately.

“He really gave me that shot to go out there and make an NFL-type kick,” Ramage said. “Luckily I had a really good hold and a really good snap…and there was a little bit of wind behind me that helped carry it in.”

Southlake lost a low-scoring game against Union that night, but a year earlier Ramage hit a game-tying field goal from 28 yards in the closing seconds of regulation, and the Dragons defeated their rival Coppell in double overtime.

In the student section that night was Jacob Nesbit who, like Ramage, had already committed to play baseball at Arkansas by that time. Nesbit was a student at Coppell but was no longer playing football.

“He was an unreal kicker,” said Nesbit, who has been Ramage’s roommate for three years at Arkansas. “He could have played Division I football if that had been something he wanted to pursue. Just watching him play in high school, you could tell he knew what he was doing and he was constantly making kicks in clutch situations.”

Ramage grew up playing youth soccer outside Richmond, Va. He always had the biggest leg on the team and felt he could kick the ball farther than anyone else.

So when the opportunity came for him to play football, it just made sense to be a kicker.

“I figured out it was something I was good at," Ramage said. "It kind of just came natural to me.”

His father’s work moved the family to Texas while Ramage was in second grade. It didn’t take long for him to catch the football bug that bites a lot of boys in Southlake, where the Carroll football team has won eight state championships.

“You looked up at them like they were some kind of professional athlete. They were definitely role models for us.”

Ramage was a kicker, receiver and defensive back in seventh and eighth grade. He kept improving as a kicker, thanks in part to good contacts. His older brother was close friends with Drew Brown, the Southlake Carroll kicker who later spent four years as a starter at Nebraska.

Drew Brown’s older brother was Kris Brown, who also was a four-year starter at Nebraska and an 11-year veteran of the NFL, primarily with the Houston Texans.

“I grew up kicking with (Drew),” Ramage said. “He would give me pointers and stuff like that.”

Sometimes Kris Brown would practice with them on trips back to his hometown.

“There was a long line of great kickers at Southlake,” Ramage said. “I needed to uphold that tradition they had.”

Ramage said he would have had opportunities to play high-level college football had he pursued a future in kicking, but he was more interested in baseball, especially after he committed to Arkansas the summer after his sophomore year.

“Before the baseball stuff happened, I thought it might be kind of easier to be a kicker, but then when the opportunity came to play for Arkansas, that kind of maybe got pushed to the back a little bit,” Ramage said. “I still wanted to be the best kicker I possibly could be and do everything I could for my high school team, but I think at that time I was so excited about having the opportunity to play for Arkansas on the baseball field.”

Ramage said he had conversations with recruiters from the football staffs at Texas Tech and Houston, and Alabama wanted him to attend a summer camp for kickers.

“I had been contacted by schools but no one had offered me scholarships,” Ramage said. “Toward the end of my junior year my football coach came up to me and said, ‘Hey, if you really want to do this kicking thing, too, there are schools reaching out to me wanting to know what your interest is.’

“I just told my football coach, ‘Whatever they say, I think I’m just sticking with baseball.'"

That was a decision that made Van Horn happy.