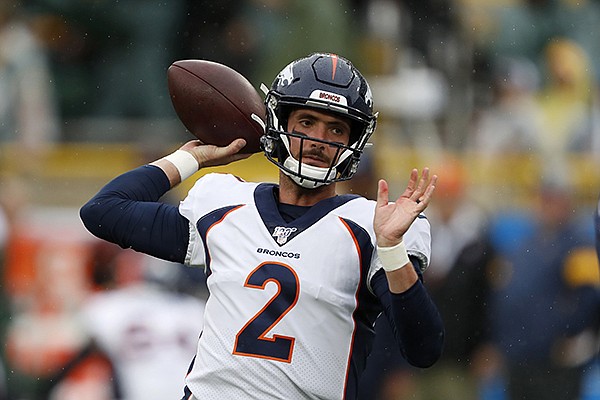 Former Arkansas quarterback Brandon Allen is expected to sign with the Cincinnati Bengals this week, according to a report.

Tom Pelissero of NFL.com reported Wednesday that Allen, who played for the Razorbacks from 2012-15, was in Cincinnati for a physical and covid-19 test. He added that Allen, 27, will likely sign this weekend.

Since being selected by the Jacksonville Jaguars in the sixth round of the 2016 NFL draft, he has spent two seasons with the Los Angeles Rams and one with the Denver Broncos.

Allen was claimed off waivers by the Broncos last September and, following an injury to starting quarterback Joe Flacco, made three starts in 2019. He totaled 515 yards passing, three touchdowns and two interceptions.

In his first start, Allen passed for 193 yards and two touchdowns in a 24-19 win over the Cleveland Browns.

With the Bengals, Allen will add a bit of experience behind quarterback Joe Burrow, the Heisman Trophy winner from LSU and No. 1 overall pick in this year’s draft. Cincinnati head coach Zac Taylor and Allen’s paths crossed when Taylor served as assistant wide receivers coach with the Rams in 2017 and quarterbacks coach in 2018.