Arkansas' games vs. Texas A&M, Missouri likely to be played on campuses 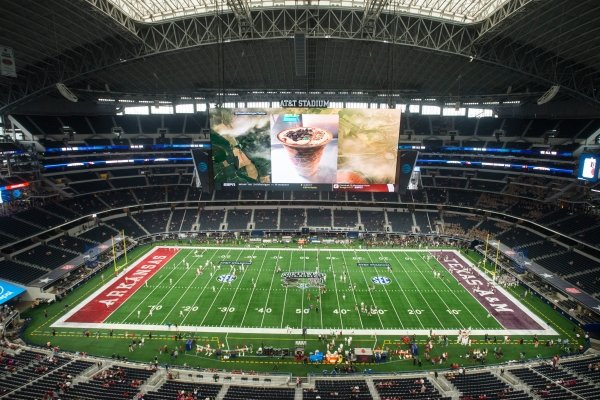 A view of AT&T Stadum Saturday, Sept. 29, 2018, before the Southwest Classic between Arkansas vs Texas A&M in Arlington, Texas.

FAYETTEVILLE — Arkansas' games against Texas A&M and Missouri this fall will likely not be played at neutral sites as originally planned.

The Razorbacks were scheduled to face the Aggies at AT&T Stadium in Arlington, Texas, and the Tigers at Arrowhead Stadium in Kansas City. Now, those games are expected to take place on campus at Texas A&M's Kyle Field and Missouri's Faurot Field.

During a Zoom conference with reporters on Thursday, Arkansas athletics director Hunter Yurachek said UA will continue to work with Texas A&M AD Ross Bjork, as well as the Jones family and AT&T Stadium officials, to move the annual Southwest Classic game to College Station, Texas.

The Razorbacks and Aggies are under contract to play annually in Arlington through 2024.

"I know it's Texas A&M's desire now with only having five home games with a 10-game schedule to move the game," Yurachek said.

He added that it "would be the fair and equitable thing to do" to then move the teams' meeting in 2021 to Fayetteville, but noted "we'll see what that looks like moving forward. I'm just worried about playing this year right now."

Arkansas and Texas A&M have played at AT&T Stadium in nine of the last 11 seasons. The first game in the series was the second college game ever played at the stadium.

Missouri AD Jim Sterk said Thursday in an email to students that he expects the Tigers’ game against the Razorbacks to change venues. Last August, it was announced the teams would meet at the home of the Kansas City Chiefs in 2020.

"I think it will most likely be a date change and I think with, just in general, the NFL venues and what they’re each going through in their own NFL season, I think you will see that game be moved back to Columbia," he said.