SEC’s news is great for those craving sports 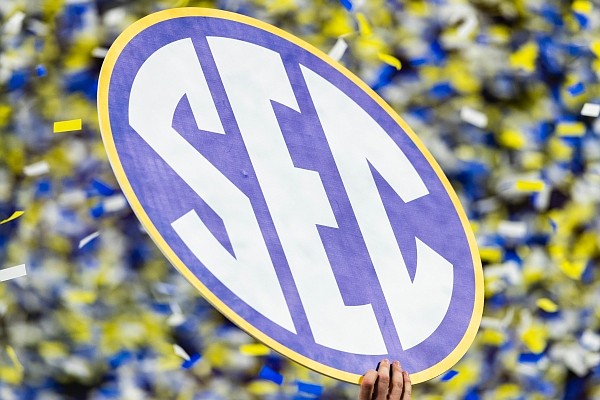 SEC sign held up by a player after the Southeastern Conference Championship NCAA college football game against the Alabama Crimson Tide and the Georgia Bulldogs on Saturday, Dec. 1, 2018 in Atlanta. (Ric Tapia via AP)

In a bold and aggressive move Thursday, SEC presidents approved football for the fall, and that’s a huge challenge for any team trying to rebuild.

For the University of Arkansas, it is so long to Notre Dame and three other nonconference opponents and hello to two games against SEC East teams.

The SEC will play a 10-game conference-only schedule, and if there is any fairness in the new schedule, which was not announced Thursday, the Razorbacks will get to play Vanderbilt, thus ensuring one of the cellar-dwellers of an SEC victory.

Every SEC West team already has a brutal schedule, but after going 4-20 the last two seasons no school faces a bigger challenge than the UA.

With the coronavirus raging in the SEC footprint, the season-opener was pushed back to Sept. 26, giving a much needed three-week cushion before players start going face-to-face on every down.

All the schools will have an open date in the middle of the season, and the SEC Championship Game won’t be played until Dec. 19.

Obviously, this gives every school in the league five home games and five away games. It is suspected the Hogs game with Texas A&M will be played in College Station, Texas, instead of AT&T Stadium in Arlington, although nothing definite has been set. The schools do have a contract to play in Arlington.

The Big Ten and Pac-12 had previously announced a conference-only schedule.

The ACC is taking the biggest chance with a 10-game conference schedule, plus one nonconference game in hopes of keeping some rivalries alive.

Yet, there will be no South Carolina vs. Clemson or Georgia vs. Georgia Tech this season because the SEC isn’t allowing nonconference games.

Is this a glimpse into the future of college football?

ESPN, which writes big checks to the SEC, obviously would rather air conference games than some that have the SEC vs. Rent-A-Win.

In fact, if you heard a roar Thursday afternoon it was probably coming from Bristol, Conn., home of ESPN.

This is a win-win for the most powerful network in the country.

On the other side of the coin, the SEC schools are going to have be even more diligent about protecting their student-athletes from covid-19.

A lot of young people seem to think this virus is like the flu.

It is an invisible assassin.

Wearing a mask, social distancing and washing your hands will not be enough for football players.

This week, Rutgers had to suspend all football activities when several players tested positive for the virus.

In the follow-up to the outbreak, school officials discovered several of the players had attended the same party earlier this month.

Keeping about 100 young football players quarantined for an entire season is going to be hard, but it will have to be done.

It almost goes without saying that all class work will be done online.

The young men will have to be focused on playing football and being safe for more than 10 weeks.

They should not be allowed to go home and definitely not visit their grandparents.

As to how many fans will be allowed to attend games hasn’t been determined, but after the University of Texas announced it planned to allow 50,000 to attend games Austin health officials intervened.

Thursday was the first step taken toward having a football season this fall, but there will be many more steps if the season is going to be completed.

Overall, the sports-starved nation got good news, and no one was happier than ESPN.