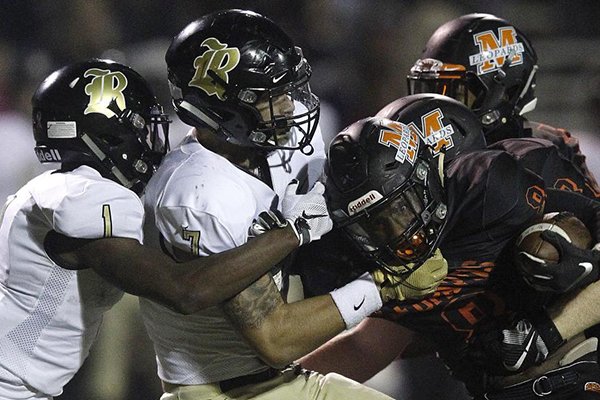 JT Towers had one year to prove himself as a linebacker.

A former quarterback at Glen Rose, Towers wasn’t going to let a toe injury prevent him from becoming one of the state’s top defensive players at Joe T. Robinson, and then an Arkansas Razorback.

Towers led Robinson to a Class 4A state championship last season and signed with the University of Arkansas in February.

In Robinson’s season opener against Springdale, Towers injured his right big toe. He missed three games, then returned to action, becoming a stalwart in the Senators’ defense.

Towers finished with 171 tackles, including 105 unassisted and 47 for a loss, 11 sacks, 4 forced fumbles and a fumble recovery in 2019. He earned first-team honors on the Arkansas Democrat-Gazette’s All-Arkansas Preps team along with teammate Chandler McIntosh, who is scheduled to walk on with the Razorbacks.

“I told myself, I wasn’t going to let the injury end my senior season,” Towers said. “I was going to do everything I could to play. I was glad I was able to play through the pain.”

Towers At a Glance

NOTEWORTHY Three-star prospect by Rivals, 247Sports and ESPN.com. … Rated as the No. 45 linebacker in the country by ESPN and the ninth overall prospect in Arkansas by 247Sports. … Recorded 171 tackles, including 105 unassisted and 47 tackles for a loss, 11 sacks, 4 forced fumbles and 1 fumble recovery in 2019 for Robinson. … Passed for 1,331 yards and 11 touchdowns, and rushed for 735 yards and 14 scores at quarterback for Glen Rose in 2018. … Chose Arkansas over Army, Oklahoma, Memphis, Navy and Texas Tech, among others.

“The pain he was in, 99% of players would have said no way they’re playing,” Eskola said. “He never got to play at full speed. We managed his practice reps. He was never healthy.

Robinson’s only loss last season was to Arkadelphia, 28-27, on Oct. 4. From there, the Senators won 10 consecutive games, and their season culminated in a state championship victory over Shiloh Christian at War Memorial Stadium in Little Rock.

Winning a state championship was special for Towers, who said the Arkadelphia loss was what allowed the Senators to focus on their main task.

“We turned a corner,” Towers said. “The team came together. People had a sense of urgency. There’s no better feeling than ending your high school career raising a state championship trophy at War Memorial Stadium.”

While he played only one year at Robinson, Towers quickly became one of the Senators’ leaders.

“It was a really great experience,” Towers said. “They accepted me as family. I enjoyed the whole ride of the season.”

Eskola had high praise for Towers, who was a three-star prospect by Rivals, 247Sports and ESPN.com.

Towers signed with Arkansas in February as part of Coach Sam Pittman’s first recruiting class. Eskola recalled Pittman telling him that he couldn’t believe Towers hadn’t been recruited more by Division I schools.

Once Pittman was hired in December, Towers felt a better connection to him and his staff than he had with former coach Chad Morris, who was fired in November after going 4-18 in two seasons.

“As soon as he and his staff got hired, I got an offer,” Towers said. “I committed three hours after I got the offer.”

Towers hasn’t let the coronavirus pandemic slow him down. He has a home gym, which includes a bench-press station and a squat rack. He’s also been working in conditioning drills to get ready for his college career.

Playing for Arkansas was a big goal for Towers, he said.

“Fayetteville is where I always wanted to go,” Towers said. “Arkansas was my dream school.”

“We can open up some eyes in the SEC. I grew up watching the Razorbacks play. I’m excited to get out there.”

Eskola said Arkansas is getting a player in Towers that will be competitive from the first practice.

“He’s a winner,” Eskola said. “Some kids will refuse to lose, and he’s that kid. Nobody will outwork him.”