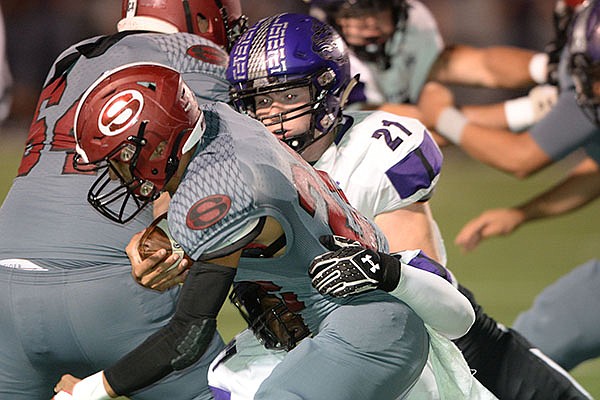 Springdale running back Gilberto Dominguez (left) is brought down Friday, Oct. 25, 2019, by Fayetteville defender Kaiden Turner (21) during the first half of play at Jarrell Williams Bulldog Stadium in Springdale.

Turner, 6-1, 217 pounds, received offers from Kansas and Indiana in May without the benefit of the spring evaluation period or the ability to visit college campuses because of covid-19.

He’s sure to add more others in the future

“I’m wanting to have a big season this upcoming year and get more offers,” Turner said.

“We were doing a lot of lifting and quickness,” Turner said. “I’m definitely working harder right now than I ever have before. My 40 has improved greatly. I was at around a 4.63 (seconds) and now today I ran a 4.54. Those were both hand (timed).”

“He’s done an unbelievable job of keeping his body right and being responsible for others and making sure they’re doing their part,” Dick said. “So he’s been real good leader for us since the offseason has begun.”

Turner was born in Sacramento but moved to Fayetteville as an infant. He said he hopes to hear from Arkansas and Oklahoma.

“They’re obviously both amazing programs,” Turner said. “They are both close to home. I have family in Norman and family here, so they’re both awesome. (Oklahoma coach) Lincoln Riley and (Arkansas coach Sam) Pittman both seem like great guys also.”

Turner recorded 87 tackles, 4 tackles for loss, 5.5 sacks, 9 quarterback hurries, 2 forced fumbles and 2 pass breakups as a sophomore. Dick said Turner is explosive and has a nose for the ball.

“He can really, really run,” Dick said. “The thing we really like about him is he understands the game, he understands leverage, but he’s really explosive when he gets to the ball.”

“I’ve grown up around football my entire life, so I can see a lot of things other people can’t,” he said. “I can always make a read super fast and react on lot of things quick.”

He is active in school and community activities.