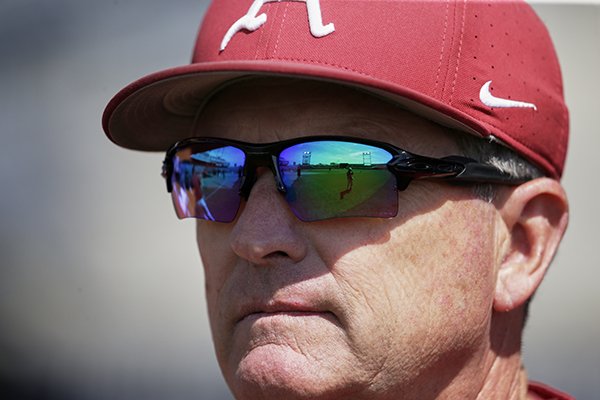 FAYETTEVILLE — The only real surprise for Arkansas from the Major League Baseball Draft this week was a pleasant one.

Two-year starting catcher Casey Opitz, who was rated a top-100 prospect by Baseball America before the draft, was not selected and will return to the Razorbacks for the 2021 season.

Opitz tweeted Thursday night he was appreciative of “all the teams that made offers,” but none “were the right fit this year.”

“For him to sign, obviously he wanted a certain amount of money or maybe the right fit, the right organization,” Arkansas coach Dave Van Horn said. “I don’t think it all fell into place for him. He got a lot of calls, and there was a lot of interest in him. It just didn’t work out.

“I think you’ve got to give him credit. He knew he could come back and be draft eligible with some bargaining power next year and get to play with his teammates another year. He’ll be drafted high next year, I feel like, and he’ll have his degree or right at it when he walks out of here. I think it’s a win-win.

“He’s going to catch for a long time. I think most of the scouts that have seen him play and have seen other catchers, they know that as far as catching and receiving, blocking, leadership, throwing, there’s not a better catcher in the country.”

The Razorbacks lost who they thought they would prior to the draft. Outfielder Heston Kjerstad and shortstop Casey Martin, both three-year starters, were drafted in the first and third rounds, respectively.

The Razorbacks also had three high school signees drafted. Masyn Winn, a right-handed pitcher and infielder from Kingwood, Texas, and right-handed pitcher Markevian “Tink” Hence of Watson Chapel were drafted by the St. Louis Cardinals in the second round. Canadian outfielder David Calabrese was a third-round pick of the Los Angeles Angels.

Van Horn said all five players — the two from Arkansas’ roster and the three signees — are expected to sign professionally.

“Those teams wouldn’t have taken them if they hadn’t been in contact with them and pretty much gotten some dollar figures figured out,” Van Horn said.

Players who were not drafted could still sign a free-agent contract with a major-league team for a maximum of $20,000. Van Horn said he does not expect any of his players to do that.

The loss of the drafted players — coupled with eight players who are not expected to return from this season’s roster — leaves at least 57 who were either on this year’s team, have signed with Arkansas as a high school senior or transfer, or announced their intention to play for the Razorbacks next season.

Managing so many players became a little easier earlier this week when the NCAA Committee for Legislative Relief made a one-year adjustment to some roster and scholarship limitations, according to reports.

The notable changes include eliminating the 35-man roster limit during the regular season, increasing the number of players who can be on scholarship from 27 to 32, and allowing teams to give players on scholarship less than 25 percent of their tuition, the previous minimum.

“It’s nice to have that option,” said Van Horn, who noted the committee did not approve a requested increase from 11.7 scholarships per team. “I don’t know if that’ll help us too much, but yeah, it was a big relief for us and a lot of programs, especially in the SEC and some of the Power 5s, that we could have a bigger roster if we needed to and also have more counters. I think that’s going to help a lot of teams.”

Van Horn said he expects more roster moves before next season. With Opitz’s return, he said graduate-transfer catchers A.J. Lewis of Eastern Kentucky and Robert Emery of San Francisco were given options.

“They can do whatever they need to do if they don’t want to come in now,” Van Horn said. “We’re in the process of working through that right now. Obviously, we’d like to at least keep one of them, and if we don’t we’ll go from there. We’ve got some other plans.”

Lewis was a Collegiate Baseball All-American this season when he batted .451 with 3 home runs and 21 RBI in 13 games. Lewis also has experience playing other positions, including first base, third base and in the outfield.

“One reason we wanted A.J. is because he is athletic and he can do other things besides just catch,” Van Horn said.

Lewis and Emery are among four graduate transfers who have committed to the Razorbacks. Arkansas has also added left-handed pitcher Lael Lockhart from Houston and right-handed pitcher Issac Bracken of Northern Colorado — both No. 1 starters prior to this season for their teams.

Brady Slavens, who was leading junior-college baseball with 14 home runs and 47 RBI when the season ended, has also signed with Arkansas. Slavens played this season at Johnson County (Kan.) Community College after transferring from Wichita State.

The Razorbacks should also return a number of experienced players who were draft-eligible this year and likely would have turned pro had the draft not been shortened by 35 rounds.

“We kept some really good players,” Van Horn said. “There’s a few more of these guys that could’ve signed and they had their number real high — I’m talking … in-state kids if they would have had a number that would have been half of what they wanted, they would have seen their name called, but instead they chose to come to school and stick to that number and stay strong, and we appreciate it.

“The guys kind of banded together to come back and … push for themselves personally to get paid a little better, but hopefully also win a championship.”