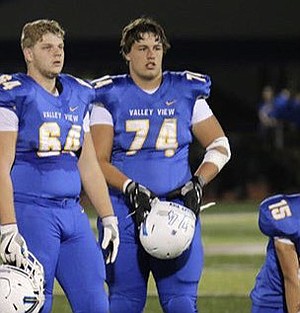 On Wednesdays, we feature an in-state prospect who could be flying under the radar of college coaches. This week's UTR prospect is Valley View’s Cole Littrell.

Stats: Helped the Blazers finish with more than 3,300 yards of total offense as a junior

"I think he’s still growing. He’s real big in the legs and in the butt. A real good squat and power clean guy. He’s played guard and tackle and we’re even talking about moving him to center some because he’s not the 6-5, 6-6 guy, but he’s 6-2 1/2 to 6-3. He’s carrying about 285 (pounds) right now and really trying to get his body right.

"He’s just a physical, physical blocker. Moves pretty well. I just think he’s someone that no one has really heard of. We had a lot of skill guys that were pretty good last year and he kind of flew under the radar.”

“With him not being able to go to any camps this summer, I think that will hurt him a little bit because he wasn’t as known as some of these other guys. I talked to Arkansas State and they're definitely going to look at him because they saw him at their camp last year. I think along with his GPA and his ACT, they like that because they know they can get some academic stuff for him, too.”